'The BBC is giving Mrs Brown her own chat show? I need a lie down' 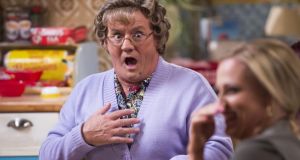 This has been a difficult time for elitist media snowflakes. We peer at one another through monocles while harpsichord music spills across the Regency furniture. Meanwhile, out there beyond the blasted heath, “ordinary people” vote for Brexit and nudge Donald Trump towards the White House. “I was in Brooklyn for Oisín’s book launch last week,” I find myself saying. “I didn’t meet a single person who voted for the ghastly man. The working classes never know what’s best for them.”

The UK referendum and the US election were shockers. Almost as surprising was a poll that named Mrs Brown’s Boys the greatest sitcom of the 21st century. What about that BBC3 thing concerning the north London sculptress and her sexually confused stepdaughter? The public really are frightful. Now we hear that the BBC is giving Mrs Brown her own chat show? Pass the Madeira. I need a lie down.

Brendan O’Carroll, the smart, hard-working talent behind Mrs Brown, is not above ridiculing these cultural divisions from the other side. In 2014, standing in for Marian Finucane on RTÉ Radio 1, he addressed negative criticism of the recently released Mrs Brown’s Boys D’Movie. O’Carroll has always argued that he cares little for reviews, but, once roused, he revealed hitherto unexplored reservoirs of resentment. In a weirdly inaccurate tirade, O’Carroll chastised The Irish Times for saying a bunch of things it never actually said. “If you want to look in The Irish Times they only gave my movie one star,” he sighed. (Donald Clarke actually gave it two). “But they gave a fantastic five stars to a wonderful Mexican movie – subtitled – that is about a Guatemalan Indian.” (That bit was accurate.) Ha, ha! Those snooty critics and their subtitled films. If his film were called Les Garçons de Madame Brun it would get five stars everywhere. Right?

Last year, it emerged that Brendan O’Carroll was set to collaborate with the African-American writer and director Tyler Perry. The partnership could hardly be more appropriate. Perry achieved fame with a school of broad, sentimental comedy that often features his most popular creation Madea Simmons. Mrs Simmons, played in drag by Perry, is a working-class black woman whose aggressive nature fails to fully conceal a heart of gold. Perry’s films – rarely released here – get terrible reviews before going on to make barely countable millions. In 2011, Forbes named him the highest-paid man in US entertainment. Sound familiar?

The comparisons go beyond the superficial. Snooty critics hate Tyler Perry’s work. Snooty critics hate Brendan O’Carroll’s work. But there is no sense that snooty critics hate Tyler Perry or Brendan O’Carroll. They seem like decent fellows who appreciate the affection audiences put their way. The connections made above with Brexit and Trump are not meant to imply that O’Carroll’s politics (or those of his fans) lean in such unlovely directions. O’Carroll gives away thousands to charity. In an unlikely collaboration, Lenny Abrahamson, Oscar nominee for Room, directed Mrs Brown in a video supporting the Yes campaign in the marriage-equality referendum. Perry and O’Carroll are all right.

Most lefty, urban pundits would prefer not to hate Mrs Brown. On paper, the profane matriarch sounds like an adorable creation. There should be space for an uncomplicated comic harridan in the spirit of Les Dawson’s blousy gossips or Mollie Sugden’s immortal Mrs Slocombe.

Who doesn’t like a story of triumph in the face of adversity? After leaving school at 12, O’Carroll worked at every casual job imaginable for two decades. “At 35 years of age, I found myself owing more money than I owned,” he told me in 2014. “Friends had always said I should go on the stage. I did a gig at the Rathmines Inn and suddenly found I could say what I liked.”

Stand-up led to plays. Plays led to TV. Mrs Browne, a version of his mother, the Labour TD Maureen O’Carroll, first arrived on the radio in 1992. Books and stage shows followed. In 1999 Anjelica Huston played a version of the character in the film Agnes Browne. But it took until 2011 before Mrs Brown, now without the e, became a full-throated, zeitgeist-defining sensation.

There is one significant distinction between Tyler Perry and Brendan O’Carroll. Perry has had difficulty appealing beyond his core African-American demographic (something that may change as Agnes Brown meets Madea). When BBC Scotland finally brought Mrs Brown to a British audience, there was every chance she would be greeted with baffled stares and inclined ear trumpets. Initial notices were, of course, unspeakably dreadful. Grace Dent, influential critic at the Independent, went so far as to call an early Christmas special “the worst comedy ever made”.

However the show almost immediately picked up an enormous following. Here (again, we’re drawing no political lessons), there is another connection with the ignored demographic that voted for Brexit. Commissioning editors at the BBC never much considered the tastes of viewers unimpressed by the innovations of alternative comedy.

“Somewhere in the 1980s, comedy began to leave the people behind,” O’Carroll told me. “There was Morecambe and Wise. Then comedy became more snarky. It was more about the universities. For a long time, nothing filled that void.”

Like Miranda, another show that seemed to have been commissioned by accident, Mrs Brown’s Boys went some way to filling that void. But it would be wrong to suggest the show could have been plucked unaltered from the 1970s. One of the oddities of this supposedly traditional series is that it features profane, sexually explicit humour rarely seen on television before The Young Ones kicked over the statues. The show also allows a degree of self-consciousness – breaking of the fourth wall, shots of the audience and the lighting – that would have appealed to Bertolt Brecht’s bawdier inclinations. In short everything about Mrs Brown’s Boys is commendable apart from Mrs Brown’s Boys itself. Refrain from actually watching it and it’s easy enough to believe it’s an essential masterpiece.

Let’s be optimistic. A Mrs Brown talk show makes good sense. Irish entertainers have been at the heart of the BBC empire since the days of Eamonn Andrews. Terry Wogan and Graham Norton bossed celebrity talk in subsequent decades. Mrs Merton and The Kumars at No 42 have confirmed that fictional characters can effectively host such enterprises. The personae allow entertainers to sneak in questions they would be too embarrassed to ask as themselves.

Brendan O’Carroll is at his most irresistible – winning over even the harshest critics – as a raconteur on The Graham Norton Show and The Late Late Show. Those of us who, despite our best efforts, have failed to like Mrs Brown, will have our best chance yet at achieving that eccentric ambition. If it doesn’t click with us, we’ll always have Proust, the verse of Rainer Maria Rilke and Beethoven’s late quartets. We’ll always have subtitled films about Guatemalan Indians. Another slice of ortolan, Síomha?