Television: ‘Broadchurch’ rules the airwaves , while ‘Charlie’ seems all at sea 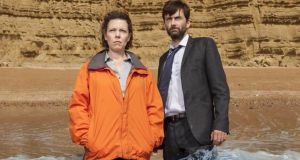 Death becomes them: Olivia Colman and David Tennant in ‘Broadchurch’

Watching Broadchurch (TV3, Monday) after the first part of RTÉ’s Charles Haughey trilogy was like stepping out of the theatre and into fresh air.

The first series of the ITV murder mystery was a complete, perfectly formed whodunnit that, two years ago, was that rare thing event TV.

One reason Broadchurch worked was because so much seemed so ordinary: the seaside town with its everyday folk, the spiky professional relationship between the very ordinary police duo of DI Alec Hardy (David Tennant) and DS Ellie Miller (Olivia Colman), and the genuine puzzle of what happened to the murdered boy Daniel Latimer.

The killer was revealed and the case solved, so the opening scene of this second series sees Miller back in uniform on traffic duty. It seems like a seamless continuation – she could hardly have kept her detective job, given that her husband, Joe, was the killer and she didn’t twig it.

Hardy is back as well, still obsessing over the Sandbrook case, where two girls were murdered – which we know from series one is what broke him and brought him to Broadchurch. But then, in court – spoiler alert – Joe Miller pleads not guilty, effectively reopening the Latimer case and promising, instead of a new whodunnit, a courtroom drama, and one with the terrific Marianne Jean-Baptiste and Charlotte Rampling as opposing barristers.

The show’s brilliant writer, Chris Chibnall, presents Broadchurch as a town broken by a tragedy that touched everyone. Alongside that trauma and the court business, it looks as though he’s going to weave into the mix the Sandbrook murder for Miller and Hardy – an even tighter double act in this confident, pacy opener – to solve.

There are flaws. I’m not so sure about the appearance of a woman in the witness-protection programme who is hiding from the Sandbrook murderer. That seems a bit too Hollywood for sleepy Broadchurch. In this first episode the barristers meet on the beach: it’s atmospheric but unlikely. And it’s the Latimer family who choose Rampling’s reclusive character as their QC to prosecute the murderer – something that simply couldn’t happen.

Even though series two of Broadchurch can’t be as compelling, tense and original as series one, it’s still a must-see.

Political powerbroking is the stuff of compelling TV drama, especially when it involves a narcissistic character clawing back from political obscurity. In series two of House of Cards Frank Underwood ruthlessly fought off enemies and bought off friends to become president. In Borgen Birgitte Nyborg calculated, schemed and used every bit of her political nous to gain power.

Still, they’re only fictional characters. How much more gripping would it be if there were a real person like that, with the same dramatic arc?

You’d think so. But Charlie (RTÉ One, Sunday), the first episode of the much-hyped trilogy about the late taoiseach, is oddly lacking in drama. It’s certainly full of wordy exposition: characters tell you what is happening or what just happened. Astonishingly, even Haughey’s big sit-downs with Margaret Thatcher aren’t dramatised. But there is little dramatic onscreen tension anyway.

It starts in 1979, as the Donnycarney Napoleon propels himself from the ministerial ranks to the taoiseach’s office. But the powerbroking that gets him there is condensed. (Underwood and Nyborg took hours of TV time to make the same gains.) And unless you’re on the sofa buttoned up in your political anorak, it is difficult to follow – or be much interested in.

It appears to involve Charlie’s sidekick PJ (Tom Vaughan-Lawlor) – an odd inaccuracy from Colin Teevan, the drama’s writer, as Haughey always called him Mara – going around with what looked like a bingo sheet, the numbers representing deputies who might support Haughey, and ticking them off. And who are most of those men with their bad hair, sludge-coloured suits and clunky lines of dialogue? It isn’t clear. (Charlie does look great and is authentically beige: the late 1970s were not a colourful time in Ireland.)

A few scenes hint at what might have been if only the script hadn’t tried to pack in so much historical information, notably the bacchanalian private party at the Haughey mansion in Kinsealy, which is contrasted with Haughey’s famous living-beyond-our-means TV address to the nation.

Of course, all eyes are on Aidan Gillen. He’s too young for the role, but he gets Haughey, particularly the voice but also the sense of menace, greed and entitlement, and the brazen corruption. But his dialogue, especially with Mara, is stiff and unnatural. Even his postcoital chat with his mistress, Terry Keane (a vibrant, blousy Lucy Cohu), is a booming oratorical soundbite on the nature of power.

The drama of Haughey having a mistress is also negated by the absence, even in his family home, of his wife and four children. If Haughey is just a name to you in the history books, and you missed the three passing references to Maureen and the kids, you may not have copped that he was married. And the sawing cello soundtrack? That was pure Hammer horror in its theatricality, promising more dread than it delivered.

The main location is a police station (a touch of The Bill); there are also a pub, a cafe and a soon-to-open supermarket: plenty of places for the two central families – the moneyed Hennessys and the rough-edged Kielys – to run into each other.

It’s fast-paced and looks great, with top-notch acting from a huge cast, including old hands such as Cathy Belton, Richard Flood, Andrea Irvine and Paul Roe (as the menacing head of the Kielys) and newcomers including India Mullen, Adam Weafer, Jack Nolan and Jane McGrath (who is terrific as idealistic new garda Sharon Cleere).

Red Rock is written by Peter McKenna and directed by Matt Carter, who both have long records in weekly dramas, from EastEnders to Holby City. Everyone seems to be sleeping, fighting or working with each other, or in some cases all three, as it should be in soapland. There’s melodrama with the two warring families, balanced by a comic thread from jobsworth garda Paudge (Pat Ryan) and his wide-eyed sidekick, Sharon.

Red Rock is very good; let’s hope it catches on.

Ones to Watch: Lena Dunham’s uphill challenge
Series four of Girls starts on Monday (Sky Atlantic), although by now the New Yorker twentysomethings are a narcissistic, brittle quartet without an ounce of likeability. It will be a challenge for Lena Dunham to wring some comedy from her once funny series. For something a bit more challenging, Walking the Nile (Channel 4, Monday) follows the British explorer Levison Wood as he follows its path on foot from source to sea – a nine-month hike.

Brie Larson is sick of being interviewed by ‘white dudes’
7

Dancing with the Stars: Glenda Gilson sinks like Titanic
10

Welcome to Sligoville: The story of the Irish in Jamaica
Real news has value SUBSCRIBE