Less than 1% of TV programmes on RTÉ are broadcast in Irish, Coimisinéir Teanga finds 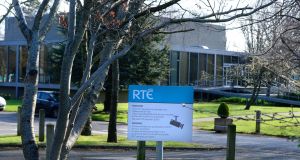 The amount of Irish language programming on RTÉ is “seriously deficient” and is in breach of the Broadcasting Act, an Coimisinéir Teanga Rónán Ó Domhnaill has found following a formal investigation into the national broadcaster.

The findings are contained in the annual report of the Language Commissioner for 2018 published by the Office of An Coimisinéir Teanga on Thursday.

Mr Ó Domhnaill said the investigation into RTÉ’s programming output, which was triggered following a complaint by a member of the public, ranked as one of the most significant investigations undertaken “ in the history of the office”.

Mr Ó Domhnaill said it was obvious that a comprehensive range of programming was not being provided in Irish. He said the investigation found that RTÉ was “at odds with the will of the Houses of the Oireachtas” and “is in breach of the Broadcasting Act”.

The investigation also found that some of the genres RTÉ was obliged to cover in Irish were only catered for in a limited fashion or not at all.

“It is clear that the amount of Irish-language programming needs to be increased in a systematic and comprehensive manner, in many programme areas, to meet the obligations of the Broadcasting Act,” he added.

Mr Ó Domhnaill recommended that the broadcaster provides his office with an implementation plan within six months outlining how it will meet its requirements as prescribed in the Broadcasting Act 2009.

The investigation concerned tweets issued by the @GalwayCoCo account in 2017. The tweets, which related to Gaeltacht areas, were issued in English only and refered to the unofficial English versions of Gaeltacht placenames.

The council was found to be in breach of its own statutory language scheme and it was recommended that it puts appropriate arrangements in place to ensure that the official versions of Gaeltacht placenames are used in future. It was also recommended that any tweets concerning Gaeltacht areas or communities would in future be issued in Irish or bilingually.

“When it is decided to communicate with a Gaeltacht community in English only, the functionality of English . . . is confirmed, as is the non-functionality of Irish,” the coimisinéir wrote in the report.

“English is being normalised as the main language of communication and as the most effective language in which to conduct business with the local authority and other administrative institutions on which the Gaeltacht community relies,” he added.

The coimisinéir said was “noticeable” that there was an increase in complaints received relating to responses in English to correspondence in Irish and difficulties people had using their name and surname in Irish.

“These are basic services that should be in place by all public bodies by now,” Mr Ó Domhnaill said.

He added he was “disappointed” that computer systems operated by public bodies were incapable of handling the síneadh fada.

Difficulties encountered by the public in using their names in official correspondence “highlight the importance of bringing into effect the recommendations made in the heads of the new Bill regarding the accurate recording of names and addresses in Irish,” he said.

The annual report shows that the office received 634 complaints during 2018, a slight drop on the 638 it received in the previous year.

The highest number of complaints came from those living in Dublin (32 per cent) while some 20 per cent of complaints derived from Gaeltacht areas.

Provisions contained in language schemes accounted for the highest proportion of complaints in the report, at 35 per cent, followed by signage and stationery (29.7 per cent), response in English to communications in Irish (9 per cent) and the lack of Irish on road signs (8.5 per cent).