Reaction is the best thing about those sexist Sprite ads

A soft drinks ad ran into controversy this week. Error of judgment, or deliberate effort to provoke outrage? 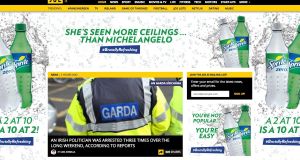 An ad for Sprite has run into controversy this week for its sexist tone, but is the ad an error of judgment by the creative team, or a deliberate effort to provoke outrage?

A statement from Coca Cola, makers of Sprite and the company responsible for the campaign, suggests that in striving to be “edgy” the campaign strayed into unacceptable territory. But an experienced Irish advertising copywriter says that errors of that nature are rare.

Director of Brand Artillery Eoghan Nolan says that he is tempted to believe that the controversy may have been “partly deliberate”: “To some extent, you rarely see a huge campaign that hasn’t been researched heavily. Clients do not spend hundreds of thousands of euros or dollars without checking it out extensively with focus groups,” he says.

Intended to provide “an edgy but humorous take on a range of situations” according to Coca-Cola, the campaign took a step too far when a takeover ad ran on popular news website Joe.ie. The #BrutallyRefeshing ad featured slogans such as “She’s seen more ceilings... than Michelangelo” and “You’re not popular... you’re easy”.

“Anyone can court controversy,” says Nolan. “The thing about slut-shaming is that it’s generic. It’s available to any brand aimed at young men. They’re trying to keep in that it’s ‘refreshing’, but there’s absolutely nothing refreshing about that ad, because as many have pointed out, it’s dated in its misogyny.”

Although the advertisement itself is overtly sexist, it can’t be said that nothing’s changed in terms of Ireland’s attitudes towards women. Sprite’s controversial ad is just the latest in a long tradition of misogynistic advertising, but the reaction to it and its discontinuation herald a step forward for gender equality rather than a step back.

The campaign – and the Joe.ie ad in particular – were roundly criticised by Twitter and social media users this week under the hashtag #everydaysexism, and the story was picked up by world media outlets including BBC News. The Advertising Standards Authority of Ireland has confirmed to The Irish Times that it has received complaints about the advertisements, though did not say how many.

Most notably, however, Coca-Cola Ireland said that they would not continue with the campaign following the reaction. “We apologize for any offence caused by the #BrutallyRefreshing Sprite campaign in Ireland, and we have removed the advert in question,” said a spokesperson.

“We strive to deliver the highest standards of advertising, and we recognize that on this occasion the content did not meet our, or our consumers’, expectations. The campaign has now ended, and the advert will not appear again.”

It’s been 50 years this year since Dunnes Stores ran “He’ll like you better in St Bernard” as a slogan in a print advertising campaign aimed at women hoping to impress men in Ireland. But in recent months we have seen campaigns that are just as sexist. The difference is that today, such advertisements provoke controversy rather than passivity.

This year’s “Are you beach body ready?” series of ads in London tube stations for Protein World’s weight loss products and the recent GAP children’s back-to-school campaign (which depicted a young boy as ‘The Little Scholar’ with “genius ideas” while a young girl was ‘The Social Butterfly’) both provoked outrage in the UK.

Similarly, Hunky Dorys’ ‘The Girls are Back in Town’ campaign in 2010 featuring female Gaelic football players caused uproar in Ireland.

Men and women are no longer putting up with such inappropriate representation. The removal of the Brutally Refreshing campaign won’t end catcalling and harassment. Neither will it close the gender wage gap.

But whether the campaign was created to court controversy or not, the controversy proves that there are enough people who disagree with dated approaches such as these to bring down a Coca-Cola advertising campaign.

Sprite may have missed out on its own brutally refreshing truth: that the majority of Irish citizens don’t want to put up with misogyny any longer.