Review: ‘The Ryan Tubridy Show’, ‘Down to Business’, ‘Moncrieff’ 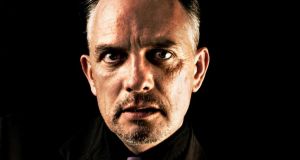 Joe Rooney: the comedian chokes up when he tells Ryan Tubridy that his mother died when he was 11

As revelations go, the news that Irish families aren’t always the happiest of entities is akin to saying that Donald Trump isn’t renowned for his modesty and tact. But for anyone who may have missed the memo, the clinical psychologist Keith Gaynor appears on Tuesday’s edition of The Ryan Tubridy Show (RTÉ Radio 1, weekdays) to reiterate the idea.

The last quality isn’t much in evidence during Tubridy’s item on adult offspring who have cut their parents out of their lives. Having received a listener’s letter on the subject, the host invites his audience to share their tales of parental estrangement, prompting an apparently unprecedented response.

As the stories roll in, Gaynor identifies those parents whose well-intentioned “sniping” causes friction and those who are simply “toxic”. Either way, the result is often what one listener calls “living bereavement”.

Most of the testimony comes from the point of view of the grown-up children rather than their parents. Tubridy wonders whether this is because the latter are “people of a certain age” who prefer stoic silence to emotional discourse – “the pre-Oprah generation, before people went on journeys the whole time”. His snarky comment is a bit rich, given the deftness with which he steers his own guests on such journeys.

On Wednesday the comedian Joe Rooney appears on the show, ostensibly to talk about his experience of agoraphobia. But, with his host pressing him, Rooney ends up in a more fraught place: his family past.

He recounts the panic attacks he endured after his band Guernica split, in the 1980s. But the roots of his condition lie in “something I was hiding from, that manifested itself physically – the death of my mother”. On cue, Tubridy ushers his guest through those difficult memories, with increasingly troubling results.

Rooney chokes up when he says his mother died when he was 11. Tubridy helpfully explains to listeners that his guest has his head in his hands, before adding: “I’m getting the impression that this is tough for you.”

When Rooney talks about his dying mother saying something hurtful to him, the host asks him to “share that with us”, leading to another outpouring of emotion. Rooney again breaks down when recalling the moment of his mother’s passing, at which stage Tubridy finally stops probing. “I don’t think it’s fair to you,” he concedes.

The interview, while compelling, seems voyeuristic. Although Rooney thinks his emotional candour is preferable to silently shutting out the past, to hear someone in such obvious distress is upsetting, particularly when he then talks about difficulties in his own long-term relationship: “I think it’s all come to a head.”

Tubridy sounds uncomfortable by the end of the interview. Trying to draw a lesson from the experience, he says that “it comes down to what we were talking about families – we’re not great at talking”. But his chastened tone suggests that he feels some conversations should remain private.

There is more on-air weeping on Down to Business (Newstalk, Saturday), but here the host is the one displaying the emotion. Having been absent from his show as he had treatment for cancer, Bobby Kerr initially returns in trademark ebullient form.

Declaring himself “delighted to be back”, the celebrity entrepreneur starts to thank “everyone who sent cards, rosary beads, for all your love”, only for his voice to crack, as he audibly fights back tears. But he quickly recovers his composure, rallying himself with a stirring call to arms: “Let’s make some great radio!”

What ensues falls some way short of that. As a businessman, Kerr knows his subject well. But unlike Richard Curran, the journalist host of Radio 1’s rival The Business, Kerr prefers playing the role of booster rather than inquisitor. He claims that “this is the show that talks to the most interesting people in Irish business”, but too often the conversation takes the form of chummy anecdotes.

This is particularly the case during Kerr’s interview with Ray Coyle, former boss of Largo Foods and owner of Tayto Park. Having already described his guest as “legendary”, the host almost lets his enthusiasm get the better of him. “I won’t say the great, late Ray Coyle, but I’ll say the Ray Coyle we’ve known for many years,” Kerr clarifies, presumably to Coyle’s relief.

Kerr opts for softball questions. Of Largo’s occasionally questionable marketing wheezes, which included scantily clad women rugby players, the presenter merely asks if it was “all about fun”. He then reveals the real reason for the encounter. Coyle has had throat cancer – or, as Kerr puts it, “Like myself, you had a knock on the shoulder, a kick in the arse.”

For a few minutes the exchange has a frankness that has been previously missing. Coyle says he “wondered why it was me” who had got sick, while noting the selfishness of the thought. He talks of being scared but realising he had no option but to face treatment. As the interview ends the two men bid farewell on an almost tender note, with Kerr calling Coyle “an absolute inspiration”.

It might not be great radio, but it’s good to hear a happy ending.

Moment of the Week: Tara Duggan keeps her poise