Radio: Brexit parting is such sweet sorrow for Sean Moncrieff 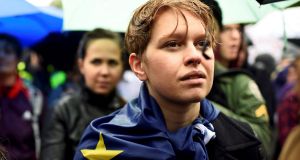 Sean Moncrieff isn’t renowned for his sensitive style, unless you count irony as an emotion. But on Wednesday’s Moncrieff (Newstalk, weekdays) he lets out a cri de coeur. “Let’s not talk about Brexit,” he implores his guest Patricia Murray, a psychologist.

It is, inevitably, a vain aspiration. Before the show has ended the presenter has had a discussion with Mairead Lavery, a regular contributor, about how the UK vote to leave the EU will affect Irish agriculture, adding to the Brexit-analysis mountain that looms over the radio landscape all week. Moncrieff does his bit, hosting items that actually aid our understanding of the crisis.

On Monday he speaks to Gavin Barrett of University College Dublin about article 50, the clause in the Lisbon Treaty that allows states to leave the EU. Barrett says it was added as “a put-up-or-shut-up clause” for troublemaking countries, chiefly the UK, “thinking nobody would dare to do it, but unfortunately they did”.

Barrett then outlines just how enormous the task of quitting the EU is. When Moncrieff ventures that there must be hundreds of British laws incorporating EU regulations, his guest disagrees: “No, there are thousands.” The whole process, Barrett says, is “complicated”. The same word could sum up the UK’s relationship status with the EU.

On this evidence the chances of a swift or amicable divorce seem about as likely as Moncrieff revealing his inner feelings.

That said, the host smarts enough from his airtime being cut in Newstalk’s upcoming new schedule to unleash a few jokey yet clearly miffed barbs on Tuesday. That’s on top of his maudlin on-air farewell to his departing producer, Caroline Clarke, the previous Friday, which ends with them tearfully declaring their love for each other. In this atmosphere anything can happen.

Hard facts can be hard to come by amid the hours of febrile speculation of Brexit, but Drivetime (RTÉ Radio 1, weekdays) provides some respite. This is largely thanks to Mary Wilson, whose brisk style precludes crystal-ball gazing: even in her most carefree moments Wilson sounds as if she’s ticked off with someone.

On Tuesday it’s the former Labour Party leader Pat Rabbitte, who earns a couple of rebukes from Wilson as he discusses Jeremy Corbyn’s battered stewardship of the British Labour Party. Rabbitte has a low opinion of Corbyn, saying that before he became leader “he never had to make a decision other than where to tie his bike and what he was going to oppose that day”.

As is his wont, Rabbitte undercuts his analytical acuity with a tendency towards bumptiousness, as when he belittles Corbyn’s supporters as being “far left”, “young” and “idealistic”. “You were once one of those young left idealistic people,” Wilson pointedly reminds him.

Rabbitte also grandly predicts that demands for a second Brexit referendum will grow, because “the British people are only beginning to realise what they have done”. Wilson has a sharp rejoinder: “Some will say that’s the Irish way. Keep going until you get the result you want.”

It all leaves Rabbitte flustered, as he goes on to talk about “Tony Blair’s military adventure in, er, in, er, in, er . . . ” “Iraq,” finishes the host, avoiding any condescension of her own. That aside, Wilson’s impatience with cant is a valuable quality.

The same can be said about Olivia O’Leary’s weekly essay for Drivetime, which lambasts the patronising attitude that Leave voters are misguided and unintelligent. For O’Leary the issue is democracy, even if the reasons for holding the Brexit referendum were hardly idealistic.

She suggests that the British have good reason for misgivings, such as “the image of Jean-Claude Trichet of the European Central Bank with his elegant foot on Ireland’s throat” over the repayment of bondholders.

As O’Leary concludes: “The European idea may perish in the gap between the stated aspirations of the EU and the reality.”

It’s a thought-provoking piece, particularly for those instinctively horrified by the result in the UK. The only jarring moment is when she mocks the Remain campaigner Sarah Morrison for her “patrician disdain”, suggesting that the broadcaster has a blind spot of her own. When it comes to withering scorn for humbug, few can match O’Leary at her imperious best.

Other issues surface as the week goes on, but they offer little relief. As details emerge of lavish personal expenditure by Paul Kelly, founder of the suicide charity Console, there is much anger and outrage. But perhaps the most pithily affecting item is Audrey Carville’s interview with Ger Rynne, a Cork-based counsellor for the charity, on Thursday’s Morning Ireland (RTÉ Radio 1, weekdays).

Rynne describes being shocked and saddened by the revelations, but he is calm apart from the occasional waver in his voice, even as he recalls that his salary was constantly paid late. When Carville asks if he feels betrayed his response is as damning as it is measured.

“I would run the Cork centre very economically. There were no credit cards,” he notes. “Then when you hear of the lavish overspending it’s sickening.”

Beside such deep personal hurt, Brexit talk is like pantomime banter.