In this episode of The Hilarious World Of Depression, Rachel Bloom speaks honestly of her experience 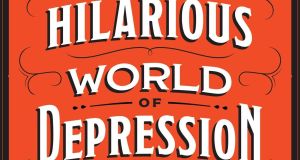 The Hilarious World Of Depression

Straight off the bat, this podcast asks, “Is depression funny?” and spends an hour trying to figure the answer out. This episode features Rachel Bloom, creator and star of the Netflix hit Crazy Ex Girlfriend in a thorough and open conversation about the experience of living with depression and anxiety: what the inner workings of that feel like.

John Moe asks probing but warm questions, and bridges the interview segments with further context about Bloom. This episode is also peppered with musical interludes from some of Bloom’s work, which make for great context.

This may sound like a too-close-for-comfort listening experience, like eavesdropping on somebody else’s therapy session – but the conversation manages to be strangely light, and peppered with advice and perspective on depression.

Bloom talks in a really clear and open way about cyclical thoughts and negative patterns without ever judging herself, and therefore anybody else who experiences them. Oddly, there’s nothing self-deprecating here, instead just honesty and humility.

There’s nothing prescriptive about how she speaks about her experience: nothing that suggests anyone else who lives with similar symptoms and behaviours should do as she says, or does. One of the purposes of The Hilarious World Of Depression is to defeat stigma surrounding mental illness, and during this conversation Moe and Bloom do a stunning job at demystifying and detailing the experience – it is an incredibly humanising thing.

Bloom talks about her experiences as an anxious child and how that impacted her physical health, her first few relationships with men and how her anxiety interacted with those experiences – her movement toward being a professional comic and what bullying in the workplace contributed to her mental health.

Strikingly, there is never any self-pity here either: just a clear look at how depression and anxiety have interacted with and influenced Bloom’s life: and how the media she produces stems from that.

Bloom’s work reaches a wide and enthusiastic audience because of how succinctly and often, hilariously, she talks about mental illness. Her work – and this interview – are a breath of fresh air in relation to the way folks commonly talk about depression.

This is not an hour of a comedian cracking jokes about numbness, anxiety and sorrow – it is a look at a life lived  alongside those things. There is no “survivor narrative” or reach to be inspiring here. There is also no characterising depression as some great black dog to be defeated. Bloom and Moe treat it as simply a thing that happens to people, a thing that has the potential to be huge and all encompassing, but also a thing that doesn’t define who a person is or what they are capable of achieving.

Many podcasts seek to talk about difficult things and to delve into the nuances and details of human pain, but too often they lean into a grimness, or a bleakness. Worse, the podcast that seeks to emotionally manipulate the listener to tears.

Here is a listen that is refreshing and frank and oddly helpful – the sense of hope here is not forced, the resilience is not trite. Bloom’s resilience is inspiring without trying to be: there’s an uncommon bluntness to it. This is an authentic, rich conversation about mental illness and living alongside it.

The Gael Becomes Irish: the prospects for the Irish language in Ireland today
10