Graham Norton, The Zoo, and At Your Service return as The Voice UK comes to a close 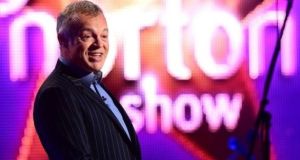 Friday nights haven’t been the same without Graham, but thankfully he’s back for a new series of chat.

Friday, RTÉ One, 9.35pm
Irish horse racing’s first family are among those joining Tubridy this week. Ruby Walsh will discuss his frustration at falling and breaking his leg at Cheltenham, so soon after getting back in the saddle; Ted will talk about how it felt as a parent to watch it happen, while Katie discusses her victory later that day and talks about her chances of becoming the first woman to win the Grand National at Aintree.

GAA pundit Joe Brolly will not only discuss sport, but also talk about growing up in Northern Ireland during the height of the Troubles and the impact that seeing his father interned had on him.

Rachel Moran was coerced into prostitution in her early teens and spent seven years in the Dublin sex trade. She campaigned strongly for a new law, brought in last year, to criminalise the buying of sex. She’ll be discussing why she believes a failure to fully enforce this new law is making the sex trade more dangerous.

Ireland’s Eurovision hopeful, Ryan O’Shaughnessy, will discuss the controversy around the Russian take on the video for his entry, while Dermot Higgins, the oldest person to travel around the world by bicycle will also make an appearance. Music will come from rock band Five Grand Stereo.

Friday, BBC One, 10.35pm
Friday nights haven’t been the same without Graham, but thankfully he’s back for a new series of chat. In the first edition, a married couple join the host, as Emily Blunt, star of The Devil Wears Prada and Girl on a Train, and US Office actor John Krasinski discuss working together in new horror movie A Quiet Place. Kylie Minogue also chats and performs her new single Stop Me from Falling from the album Golden. Plus, another bunch of intrepid audience members steps up to the plate, willing to recount an anecdote from the dreaded red chair.

TV3 &UTV, 7pm
Still no Ant, but dad-to-be Dec is in attendance as this troubled series bows out during a special show broadcast from Universal Studios in Florida.

Saturday, TV3, 8.30pm
It’s the grand final of the spinning-chair singing contest, as the remaining four singers battle it out to land a lucrative recording contract with Poldyor Records. Plus, coaches Jennifer Hudson, Tom Jones, Will.i.am and Olly Murs take to the stage for a special performance together and are also on hand to give the contestants as much help and encouragement as possible. However, ultimately it’s the viewing public who call the shots and decide who will be crowned the winner of this year’s competition.

Saturday, RTÉ One, 9.45pm
Twenty years on from the Belfast Agreement, former taoiseach Bertie Ahern and US senator George Mitchell talk to D’Arcy about what really happened during those crucial negotiations at Stormont and the personal toll the talks took on them.

John and Francis Brennan of At Your Service fame talk about what it’s like to host The Rolling Stones, why we need to get better at complaining and the things that annoy them about Irish hospitality.

Dancing With the Stars winners Jake Carter and dance partner Karen Byrne will discuss becoming champions, the secrets to their success, and Carter will also perform his new single.

Pat Shortt is bound to provide some laughs as he makes an appearance to talk about his lead role in a new production of A Skull in Connemara, by Bafta award winning writer and director Martin McDonagh.

Sunday, RTÉ One, 6.30pm
Have you got hidden treasures in your house? Better keep them hidden, because John Creedon and his crew of curators want to get their sweaty hands on them. But it’s not gold and silver they’re after - they’re looking for everyday objects that may have little monetary value, but have huge cultural and historical significance. National Treasures is a new series that travels the four provinces of Ireland to find some fascinating relics of modern Ireland and uncover the stories behind them. For the first episode, Creedon and his team are holding a roadshow in Cork, inviting the people of Munster to bring along their most treasured artifacts, including a pair of running shoes worn by Sonia O’Sullivan, and the plectrum Rory Gallagher used on his final gig (I’d bid on that one). The best objects will be chosen for a special exhibition showcasing Ireland’s social history (don’t worry - you’ll get your treasure back at the end). The panel of curators will include social historian Roisin Higgins, UCD lecturer Richard McElligott, historian and author Donal Fallon, fashion historian Ruth Griffin and design historian Linda King. Worth watching? We’ll see.

Sunday, RTÉ One, 7.30pm
You can’t beat a bunch of cute animals doing their cute animal thing - this is what telly was made for. The Zoo is going into its eighth series, but if you’re worried the format might be going stale, fret not. There are some exciting times in store at Dublin Zoo, with the arrival of Sari the Bornean orang-utan, who has come from Barcelona Zoo through a “simian Tinder” scheme. Two young gorillas, Vana and Tebogo, will be arriving at the gorillas’ rainforest, and Asha the Asian elephant is finally ready to give birth to her calf after a 22-month long pregnancy. With all this animal action, sure why would you bother watching humans at all?

Sunday, Channel 4, 8pm
Bible experts Helen Bond and Joan Taylor give an alternative view of Christ’s life, ignoring the male-dominated version we’ve grown accustomed to by revealing the part women may have played.

Sunday, RTÉ One, 8.30pm
Hotelier Francis Brennan has travelled the highways and byways of the country helping people get their hospitality businesses in shape, and he’s back for another series, showing hotel and B&B owners where they’re going wrong. In the first episode, Francis meets a family of artists and historians who have bought a country house, but lack the business acumen to turn it into a commercial enterprise. They think a tea room might stir up some business, so they enlist Francis’s expertise to help them realise their vision.