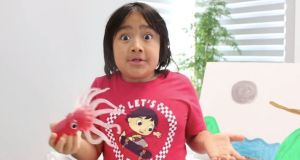 A nine-year-old boy has made more than €24 million in a year from “unboxing” and reviewing toys and games on YouTube to hold the title of highest-paid YouTuber for the third year running.

Ryan Kaji, from Texas, made $29.5 million, or €24.1 million, from his YouTube channel Ryan’s World, as well as a further estimated $200m, or €163.5 million, from Ryan’s World branded toys and clothing, including Marks & Spencer pyjamas. He also signed an undisclosed, but likely multimillion-dollar, deal for his own TV series on Nickelodeon.

Kaji, who is described as a “child influencer”, first began making YouTube videos in March 2015 after watching other toy-review channels and asking his mother, “How come I’m not on YouTube when all the other kids are?”

Kaji’s most popular video, Huge Eggs Surprise Toys Challenge, has more than 2 billion views, making it one of the 60 most-viewed videos ever on YouTube

His family, who changed their real surname, Guan, to his on-screen surname, Kaji, now run nine YouTube channels. Ryan’s World was the most popular, with 41.7 million subscribers and 12.2 billion views. Kaji’s most popular video, Huge Eggs Surprise Toys Challenge, has more than 2 billion views, making it one of the 60 most-viewed videos ever on YouTube.

But Kaji and his family are now facing the threat of a US Federal Trade Commission investigation over allegations that videos’ sponsors are not properly disclosed. “Nearly 9 per cent of the Ryan Toys Review videos have included at least one paid product recommendation aimed at preschoolers, a group too young to distinguish between a commercial and a review,” a complaint from the consumer watchdog Truth in Advertising said. “These advertisements often depict unhealthy foods.”

Benjamin Burroughs, an assistant professor of journalism and media studies at University of Nevada, Las Vegas, who studies emerging and social-media trends, warns that there is a danger that other children are “being targeted by child influencers in ways that parents may not be cognisant of or aware of”.

“As a child influencer, [Ryan] is being courted by companies to play with the latest toy so that other children can see it. But now the child influencer himself has become a brand that is then being put into Walmart, and Target, and Amazon as its own force and influence,” Burroughs says. “It’s pretty shocking.”

Burroughs says he became interested in the child-influencer phenomenon after his own children asked him to do the things that Ryan’s family was doing. “I thought, Oh, there’s something going on here if my kids are expecting our family to look like Ryan’s family. In Ryan’s family, they’re able to constantly consume content and products. They’re opening up a new toy every day, and subsequently playing with that new toy every day, so there’s this constant consumerism that’s being embedded within these messages for children.”

The top 10 biggest-earning YouTube stars took home a total of $211 million, according to Forbes business magazine’s analysis of their estimated earnings between June 2019 and June 2020.

In second place was Jimmy Donaldson, better known as Mr Beast, who earned an estimated $24 million, or €19.6 million, and was the a new entry to the YouTube richlist.

The 22-year-old is known for stunts, including freezing himself in ice and giving away huge sums of money to strangers who compete in his challenges. He also makes money from selling merchandise and partnerships with brands such as Microsoft and Electronic Arts.

Reed Duchscher, Donaldson’s manager, says: “The ideas are going to continue to get crazier, and he’s going to continue to spend large amounts of money to up the production quality. I mean, he just tweeted out today that he has all these good ideas that cost $10 million. And he’s not wrong. He does.”

3 Dude Perfect, $23 million: five friends – Coby Cotton, Cory Cotton, Garret Hilbert, Cody Jones and Tyler Toney – play stunts with lightsabers, Nerf Guns and paintballs. In March, when coronavirus first hit and professional sports were banned, the group’s YouTube channel hosted the Quarantine Classic, in which they competed against each other in three-point basketball shootouts and roller-chair hockey. The series of videos raised about $160,000 for the Red Cross and Feeding America.

4 Rhett and Link, $20 million: Rhett James McLaughlin, who is 43, and Charles Lincoln, who is 42, are some of the longest-standing YouTube stars, having begun as a nerdy talkshow in 2012.

5 Markiplier, $19.5 million: Mark Edward Fischbach has been posting popular breakdowns of video games since 2012, including a 31-part series examining 2013’s Cry of Fear.

7 Nastya, $18.5 million: Anastasia Radzinskaya, a six-year-old from Russia, has 191 million subscribers to her channel, which features her and her father playing with Lego, doing household chores and explaining viruses.

8 Blippi, $17 million: Stevin John, who is 32, is the only adult creating children’s content on the list. He stars as Blippi, the brightly dressed, childlike character who educates through videos such as Blippi Visits the Aquarium and Learn Colors with Blippi.

9 David Dobrik, $16 million: This 24-year-old is known for his stunts, including driving a convertible through a car wash and shaving someone’s entire body. But Dobrik is trying to move his fans to TikTok.

10 Jeffree Star (Jeffrey Lynn Steininger), $15 million: A former singer who quit the stage to film makeup tutorials on YouTube and launched their own cosmetics range. – Guardian