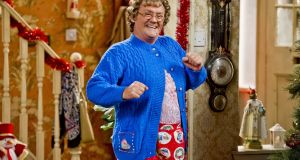 Brendan O’Carroll stars in Mrs Brown’s Boys, which was the most watched show on RTÉ television on Christmas Day.

Brendan O’Carroll’s Mrs Brown’s Boys was the most watched television show by Irish viewers on Christmas Day for the ninth year in a row.

Mrs Brown’s Boys – A Wonderful Mammy, which was a spoof of the film It’s a Wonderful Life, was watched by an average of 574,000 viewers and achieved a 41 per cent audience share.

That represented an increase of 4 per cent, with a 41 per cent share among younger audiences (15 to 34 year olds).

The most popular movie on RTE television over the Christmas period was Home Alone 2 – Lost in New York, which was watched by 381,000 on Christmas day and was viewed by 51 per cent of 15 to 34 year olds.

The second most popular movie was Beauty and the Beast, which was watched by 369,000, while Willie Wonka and the Chocolate Factory and Olaf’s Frozen Adventure also fared well with audiences.