Is Boris Johnson like ‘Hitler or one of those mad fellas’? 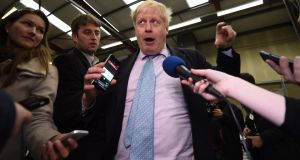 Not for the first time, Fr Dougal put it best. “God, Ted, I’ve never met anyone like him anyway,” he said of the notorious Fr Stack. “Who would he be like? Hitler or one of those mad fellas.”

It comes as a surprise to learn that, as long ago as 1996, Dougal was demonstrating an offline variation of Godwin’s law. Devised by Mike Godwin in 1990, before most of us knew what the internet was, the dictum states: “As an online discussion grows longer, the probability of a comparison involving Nazis or Hitler approaches 1.” You’re calmly defending the new all-female Ghostbusters when, out of nowhere, somebody finds a loose connections between distaff anti-occult enforcers and the Nazis’ occupation of the Sudetenland. “Is that what you want? Feminazi!”

This wasn’t expected to keep happening. As increasing decades slotted in between us and the second World War, Hitler’s role as an argument ender was supposed to wither. Yet the little nut retains his satanic value. The United Kingdom is undergoing a degree of Nazi shaming we haven’t seen since it was preparing to fight on the beaches. First we had Ken Livingstone, perennial stirrer of brown stuff, suggesting that Hitler espoused Zionism “before he went mad”. Then Boris Johnson, presumptive Fuhrer of a post-Brexit UK, argued that . . .

Then Boris Johnson, presumptive grand high wizard of a post-Brexit UK, made comparisons between an increasingly integrated EU and Hitler’s plans for the continent. “Napoleon, Hitler, various people tried this out, and it ends tragically,” he said.

When he was pressed about the comments Johnson did one of his semantic pirouettes. He explained: “Over the last few thousand years there have been all sorts of attempts in Europe to re-create the dream of the Roman Empire, and very often that’s been done by force. The EU is different: it’s tried to do it in a more bureaucratic way.”

Look how Boris implies that the fact that one uses “force” and the other “bureaucracy” is just a minor detail. What matters is the lust for unification. One fellow seeks to buy my house through a bureaucracy known as an estate agency. Another bursts through the door, smashes me in the face, flings me out of the window and then begins sleeping in my bed. These two things are, if we accept the logic above, worthy of being placed in the same category. This is crazy talk. What kind of man uses that sort of argument? Hitler or one of those mad fellas. That’s who.

When the Hitler comparison is engaged the speaker is employing a class of rhetorical blitzkrieg. (This really is catching.) The Nazis’ legacy was so hugely evil that any association, however oblique or tenuous, annihilates rational debate until the swastika-shaped mass has been shrugged off.

People who regard the eating of meat as an ideological necessity rather than as a matter of taste or ethics tend to bring up Hitler at the earliest opportunity during any debate on vegetarianism. If a vegetarian were foolish enough to argue that everybody who follows such a diet is lovely, then there may be some justification in mentioning nut-roast monsters.

But this is not how the debate goes. Red-meat totalitarians (I think I’m allowed that) argue, rather, that the whole business of keeping teeth out of flesh is tied up with an unhealthy, bullying approach to personal philosophy. One day you’re setting aside the bacon sandwich. The next you’re remilitarising the Rhineland.

We’ve mentioned the “feminazi” business. In a perversion of logic worthy of Joseph Goebbels, the urge for equality becomes equated with a repressive regime that built its appeal on instituting new layers of inequality. In the current rhetorical battleground a Nazi is, in short, just somebody you really, really don’t like. Find some largely irrelevant connections and you’re away. Suddenly, anybody who’s ever owned a Volkswagen is a mass murderer.

All of which brings us inexorably back to a discussion of Donald Trump. Barely a day goes by when he is not compared to the former Pte Schicklgruber. It’s true to say that nobody expected the Nazis to come to power in 1933. The comparison is accurate but facile. Nobody expected Leicester City to win the Premier League, either. The rise of Donald Trump is very bad news. But, far from being a far-right ideologue with precise plans for world domination, he is a bar-room boor who will say anything to get himself elected. We will say just one nice thing about Trump: he’s not Hitler.

To paraphrase Dougal, you wouldn’t find Trump playing jungle music at three o’clock in the morning.