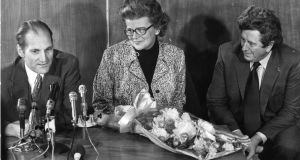 Dr Tiede Herrema with his wife Elisabeth and the then minister for foreign affairs Garret FitzGerald, at Dublin Airport in 1975. Photograph: Dermot O’Shea/The Irish Times

Elisabeth Herrema, the wife of Dutch industrialist Dr Tiede Herrema, has died in the Netherlands at the age of 94.

The kidnapping of Dr Herrema by the IRA in October 1975 made international news. He was the managing director of the Limerick factory Ferenka when he was abducted by Eddie Gallagher and Marion Coyle on October 3rd, 1975.

Dr Herrema was held hostage for 36 days. During the last 18 days of the kidnapping, Dr Herrema and his kidnappers were trapped inside a box room in a housing estate in Monasterevin, Co Kildare, surrounded by gardaí and the world’s media.

Mrs Herrema became a prominent figure at the time when she spoke to RTÉ to say the Irish government should not pay the IR£2 million ransom demanded by the kidnappers.

The Herremas were married for 72 years. Mr Herrema will be 99 on Tuesday and lives in Arnhem in the Netherlands.

The couple’s friend Joe Brennan, who was head of protocol at the Irish Embassy in the Netherlands during the kidnapping, described Mrs Herrema as an “extraordinary woman” whose public intervention was greatly appreciated by the Irish government at the time.

Mrs Herrema had a “great sense of fun and a gift for friendship”, he said.

The couple were made honorary Irish citizens later in 1975.

Their kidnapping ordeal did not put them off Ireland and they owned an apartment in Dublin where they spent many years.

“She loved having an Irish passport. They were proud to become Irish citizens,” Mr Brennan said.

The couple are survived by their four children and many grandchildren. Mrs Herrema’s funeral takes place in the Netherlands on Thursday.