In The Dark review: A detective hot on the trail of her own damage 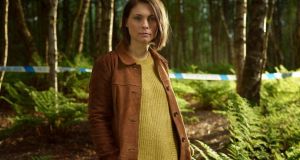 For anyone inclined to use detective fiction as a yardstick of human civilisation – or perhaps human fears – it’s worth remembering among all the present day violations, corpses and clues that there was once a time when society could be thrown into disarray with just the theft of a precious jewel. And that would be both a gross injustice and a worthwhile mystery.

In the Dark (BBC One, Tuesday, 9pm), a four-part adaptation of two of Mark Billingham’s detective novels, plunges DI Helen Weeks (MyAnna Buring) into a crime that impinges on much more contemporary concerns. Two young girls have gone missing in her hometown, one found dead and decomposing in a Derbyshire wood, the other believed to be alive, and the chief suspect is married to Helen’s childhood friend.

But in Manchester, where we began last week, Helen was already dispensing her own clues. Chasing a small-time female drug dealer down an alley, unhappily out of breath, she paused to berate the woman for still claiming welfare. It’s a curious detail, and you can imagine Leo Varadkar cheering her on, but what are we to make of this defender of justice? Halfway through the series, it is much more apparent that in Weeks we have been given a detective to be solved.

Adapter Danny Brocklehurst piles on the character details: Helen is pregnant, to the happy surprise of her partner DI Paul (Ben Batt), who we soon learn may have had no hand in it. Returning to Polesford, an unhappy valley that gives her the creeps, she divides her time between investigative mooching and meaningful flashbacks. Here is where the audience will feel overfed with evidence.

Helen has a reputation from childhood for being a bully, with a guilty concern for her estranged friend, Linda (Emma Fryer), which is so haltingly rationed out you may solve the case long before they do. (In the meantime, you can enjoy Peep Show’s Super Hans (Matt King) working as a dandy pathologist, with little adjustment to his character.)

There is a facile symmetry between the problem and the solver. The missing girls have been subjected to very similar abuse as the pursuing policewoman, as though the stakes wouldn’t register without furious overwriting, or without Weeks being asked to investigate her own damage first.

Similarly, director Gilles Bannier employs an equally blunt visual language, as though learned from music videos, in which we watch Helen’s younger self in silent, mirrored poses, ripping apart teddy bears in lost innocence, or later see the adult Helen, cradling her pregnant tummy, as her betrayed partner walks away.

Helen should feel more injured by the show, which grants her a daft eureka moment (“I know who killed Abigail Toms!”) only when she has blurted out her own truth, as though rewarded for a therapeutic breakthrough. She sees the light then, annihilating one abuser and resigning to bring charges against her own, closing the case while granted closure. In the Dark has two more episodes (another book, another case), but few remaining shadows.

Martin Freeman: ‘I’m not nice, not your best mate. I’m angry and a bit superior’
8

The Saturday Poem: On the Fifth Day
9