‘If there is a heaven, it’s Dancing with the Stars... it gave me back my mojo’ 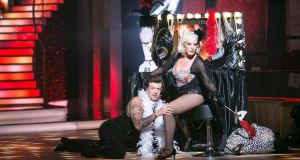 Katherine Lynch and Kai Widdrington performing the Cha Cha Cha on Dancing with the the Stars.

“I’m in my mid-40s and I was feeling a bit invisible, but go dancing and you get your mojo back,” says Dancing with the Stars contestant, comedian Katherine Lynch.

“I’m being paid to get my hair done, my makeup, my nails, and to be glided around the dance floor by a gorgeous man. I swear, if there is a heaven, it’s Dancing with the Stars,” she told Róisín Ingle on the latest episode of The Women’s Podcast.

Lynch rejected the advances of the RTÉ show’s producers initially, but they were persistent and after they suggested she would “at least bring some comedy to the dance floor”, the Wagon’s Den actress took that like a red rag to a bull and decided to prove them wrong.

“I’ve been put out of chorus lines in the past because I couldn’t keep up,” she said, but now the Leitrim woman is getting into her stride and the experience has ignited a passion she did not know she had.

The show’s UK counterpart, Strictly Come Dancing, is tabloid fodder for salacious stories about dalliances between contestants and dancers each series. Is there anything going on at Ardmore studios?

“I’ve seen nothing of that,” said Lynch, quite unconvincingly. “I’d say nobody is getting off with anyone. No, no, no, none at all.”

Also on the podcast, the comedian talked about fat-shaming and her recent turn on another RTÉ reality show, Operation Transformation.

Contestants were made to exercise in a swimming pool at the start of the show and in protest at what she deemed to be fat-shaming, Lynch donned a pair of red high-heels for the duration, both in and out of the pool.

“There was no reason for us to get into the pool bar them seeing us all in our togs, so I would not take off the red high-heels and they had to use that in the show,” she laughed. “I kind of compensated by that.”

She has nothing but good things to say about her stint on Dancing with the Stars, however, and will be “traumatised” when she gets kicked off. “I’m having the time of my life. There’s an inner Bette Midler here just actually delighted with herself,” she said.

A top four finish would be “very good”, she admitted but she would not say no to an outright win either.

“I’m unashamedly going to ‘Healy-Rae’ it now – vote for me!”

To listen to the conversation between Katherine Lynch and Róisín Ingle in full, you can find the latest episode of The Women’s Podcast on iTunes, Stitcher, Soundcloud and www.irishtimes.com

Dancing with the Stars is on Sunday nights at 6.30pm on RTÉ 1