'I laughed out loud at Mrs Brown's chat show. In The Irish Times. Near where Fintan sits' 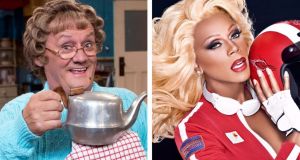 All Round to Mrs Brown’s, an RTÉ/BBC co-production, which airs in Britain with the title A Short Study of the Irish People, debuted on both stations this week (Saturday).

It follows a long tradition of chat shows overseen by fictional characters – Knowing Me, Knowing You with Alan Partridge, The Mrs Merton Show, Tubridy Tonight and, of course, Mass.

The show begins, in Beckettian fashion, with Agnes Brown, the feminine yin to Brendan O’Carroll’s yang, sitting alone in a kitchen yapping profanely to herself. She occasionally looks beyond the camera where she can see a large congregation of people judging her (the studio audience). This is, RTÉ viewers know, a metaphor for the Irish condition, but they laugh nonetheless. BBC viewers, ignorant of our tragic history, just find it straightforwardly hilarious.

Fans of the theatre will recognise the format of All Round to Mrs Brown as a sort of play within a play within a play. In the world of Mrs Brown, Cathy Brown has some sort of internet chat show that she films in her mother’s sitting room, which is embedded in the audience-filled set of a BBC studio in Glasgow, a city on the third planet in a solar system, on the spiral arm of the Milky Way galaxy, which can be found floating amid other galaxies in the godless cosmic voi . . . and so on and so on. The jokes are funnier if you understand this context.

For example, Rory, one of Mrs Brown’s eponymous boys, arrives largely so she can make a joke about her first guest, Pamela Anderson, having had Botox injections in her face. “You’ve had buttocks on your face haven’t you?” Mrs Brown asks Rory.I have to say, conscious that I might be kicked out of the Dublin 4 media elite for this, I laughed out loud. In fact, I laughed out loud several times while watching this programme, right here in The Irish Times offices, near where Fintan O’Toole sits.

“You’ve had buttocks on your face haven’t you?” Mrs Brown asks Rory.

She makes conversation with members of the studio audience whom she singles out for their mammy-like qualities. One woman, who we learn once put deep heat on her haemorrhoids, is declared Mammy of the Week. Another, who wishes to become a TV extra, is given a line to declaim dramatically later in the show: “The Macedonians are here and they have ice cream.”

Now, in the US or Dalkey, Agnes Brown, with her meddling, controlling ways, would quickly be diagnosed with borderline personality disorder and her long-suffering offspring would abandon her to join art collectives and investment funds.

Brown’s fictional offspring, aka (troublingly) Brendan O’Carroll’s real wife and/or son-in-laws and/or family friends and/or real children, just laugh fondly at her filthy rants while remaining trapped in her dysfunctional orbit of hilarity. Seriously, Ken Loach should do an episode in which social services get involved.

It is, in many ways, a children’s programme for adults
So we get the show within a show bit in which Cathy interviews Judy Murray, stern-faced matriarch of winning racketeers Jamie and Andy (“Do you ever buckin’ smile?” asks Mrs Brown), and Pamela Anderson, who is escorted into the room by a Mrs Brown’s boy wearing a blonde wig and a red swim suit. The interviews aren’t exactly probing, but, on the plus side, if anyone were to say the word “probing”, Mrs Brown would certainly get a lot of mileage out of it.

Judy Murray is persuaded to fire a tennis ball at a contraption that drops a balloon of water on top of sleeping Grandad. Mrs Brown answers questions submitted from the audience about menopausal dryness, coping with voyeuristic dogs and how to urinate in a bush (Mrs Brown helpfully demonstrates the latter).

Brendan O’Carroll is a legitimately funny man who knows how to spin a joke.

James Blunt turns up and kisses Mrs Brown passionately and Mrs Brown dances to Boombastic again. By this stage they’re all gathered in the pub which, if I’ve learned anything from Lost, will turn out to be purgatory in the last episode (RTÉ audiences recognise that all Irish pubs are basically purgatory).

Anyway, by now you are either laughing uncontrollably just picturing the shenanigans I’ve described – tears rolling down your face, gibbering like a loon, probably pissing yourself – or you’re wondering where the opera column has gone, jabbing your pipe angrily in the air like a Protestant while shaking your tweedy head at what has become of this once-fine institution (The Irish Times, not whatever institution they’ve put you in).

Well, I’m here to tell you there is a middle way. You can love and hate All Round to Mrs Brown’s at the same time. It is, in many ways, a children’s programme for adults that manages to constantly and groan-inducingly go for the comedic low-hanging fruit (ooh matron!) while being regularly hilarious nonetheless because, well, Brendan O’Carroll is a legitimately funny man who knows how to spin a joke. Sadly, for recognising this duality, I’ve been barred from career advancement among the commentariat.

Drag racy
Of course, my favourite foul-mouthed funny man in a dress is RuPaul, progenitor of RuPaul’s Drag Race (Netflix, new episodes weekly). RuPaul and Brendan O’Carroll have a lot in common. They both came from the theatrical fringes (punky drag shows and regional comedy respectively), both enjoy filthy entendres whatever the quantity (single, double) and both managed to penetrate the mainstream (ooh matron!).