Gym sessions that stretch beyond the sweat and the six-pack 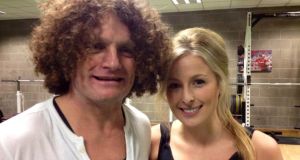 I like this year’s series of Reality Bites, and not just because each slice-of-Irish-life documentary is well made but also because they are pleasantly random. Last week’s hour-long documentary looked at young people’s attitudes to sex, and was refreshingly matter of fact. This week it featured gym culture. Next week it’s weddings. Because the programme-makers tend to approach their briefs laterally, the results can be unexpected.

The setting for Reality Bites: The Gym (RTÉ Two, Monday) varied from an industrial yard in Kilkenny where big lads hurled empty beer kegs over their heads to a large aerobics class of Lycra-clad women in the University Arena in Limerick.

The focus was as much on the instructors as on those who go to their four gyms. So the fellow in Kilkenny, James Fennelly, four-time winner of the Ireland’s Strongest Man competition, showed that he can pull a lorry – “it’s easy once you get it going” – while upbeat Paul Baldwin and his higgledy-piggledy gym in Carrickmacross, Co Monaghan, runs a sort of Cheers of the gym world, where he knows everyone’s name and they come in all shapes and sizes.

So the first half of The Gym romped along, ticking off enjoyable oddities, from the personal trainer and former Mr Ireland – who brought a touch of Zoolander to the proceedings with his “the gym is me and I am gym. We are one” – to father-and-daughter trainers Richie and Joanna Clifford. Though it was hard to not be distracted by his unusual hairdo and, as he gave instructions through high-pitched whistles, wonder how the women haven’t risen up and clobbered him with their mini weights.

But the second half of The Gym got much darker, so much so that the closing credits included a helpline number. And it wasn’t to do with pulled hamstrings or a strained six-pack. Some gymgoers and trainers talked frankly about the way exercise helps them manage their demons, especially in dealing with depression. One man spoke about the way it helped him deal with a suicide in the family, another with teenage bullying.

It was an unexpected twist and showed the skill of the directors, Gráinne Ní Fhiannachta and Trish O’Connor, in establishing relationships with the people they spoke to.

The next round of Reality Bites could include one about sunbeds, though: every time I think of that pale image-obsessed guy climbing into the gym’s sunbed I wonder about the reach of melanoma warnings.


Too much, too soon
Should you expect to be entertained by a programme about a 19th-century eviction in Co Donegal. Too soon? I don’t think so. There’s a new comedy from the writers of Miranda on BBC Three, Bluestone 42 (Tuesday), about a British army bomb-disposal unit in Helmand Province, in Afghanistan, with gags about “blood and bone confetti”. Now that’s what you call too soon. There was entertainment potential in Dúshlán, 1881, Living the Eviction (RTÉ One, Monday), because in essence it followed a reality-show format: two families were taken out of their normal surroundings and made to live for three days like poor 19th-century farmers. So it was straw beds, scratchy clothes and cooking over the fire.

And it had the historical and emotional twist that one of the families, the McLaughlins from New Jersey, are descended from Michael McLaughlin, who was evicted in Inishown in 1881 and fled to the United States. It was the family’s first time in Ireland, and they were lovely, enthusiastic and genuine.

This being an Irish-language programme, the second family, the Ghráinnes, looked to be chosen because they are gaelgóirs from Donegal. Both families’ enthusiasm for the project made it work – just.

There’s a tendency towards worthiness in some Irish-language programmes, and this was one – to make sure viewers are educated by the telly, not amused. Dúshlán ’s presenter, Rónán Mac Aodha Bhuí, in his duffel coat and with his stern face and delivery, reminded me of so many cross Irish teachers, and there were more than enough talking heads, mostly historians, when all you wanted was to get back to the cottages and see how things were going. It’s a pity the families weren’t let off the leash a bit more.

TV3 ’s The Tenements , a series of some years back for which a Dublin family lived in a tenement house, was much more authentic, entertaining, even educational, but then that was a real house on Henrietta Street, where their granny had grown up. The picturesque cottages in Dúshlán were not in remote Inishowen but in Ulster Folk Park, which might have been expedient in terms of budget but lent an Oirish theme-park feel.


Knitwear and grey skies
“On a clear day you can see Norway, ” said Detective Perez (Douglas Henshall ) at the end of Shetland (BBC One, Sunday and Monday), the latest police procedural set in a rural area with an unfeasible number of murders.

The remote Scottish isles are the location this time, and I suspect this line of dialogue was more of a nod to Scandi crime drama than a geographical reference point. And it’s a good imitation. Henshall looks like a taller, plainer Kenneth Branagh in his Walla nder days, everyone looks dour, there’s a lot of knitwear and grey skies seem to sit on top of all the buildings.

This two-parter was based on a novel by Ann Cleeves about a murder of an old woman and a young archaeological student whose motive lay back in events during the second World War, which had to be picked apart, quietly and methodically and with no note-taking – TV detectives never write anything down for some reason – before the murderer could be revealed.

Shetland is gentler than some police procedurals, with no grim autopsies or onscreen violence, and in the search to find a new twist on the crimefighting police duo, measured, unruffled Perez, with his tragic backstory – his wife died – is paired with a young woman, Tosh (Alison O’Donnell), who is more shambolic student than cutting-edge detective and whose distinguishing feature is that she has braces.

It’s easygoing and Sunday-nightish and doesn’t set itself up as a nail-biting whodunnit; it’s more a gentle unravelling of a story. I expect these two episodes aren’t the last we’ve seen of Shetland , and that’s no bad thing.