Game of Thrones: 10 things we know after episode 1 of season 6

The official trailer for the highly anticipated season six of Game of Thrones has been released. Video: HBO 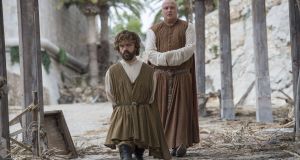 After more hype than a Conor McGregor fight, Game of Thrones rumbled busily back on to our screens, with an episode that didn’t exactly have us praising the old gods and the new.

We have been here before, though. With so many plots and locations, GoT has a tendency to drift mid-season, and it can fall into a template of various people wandering pointlessly around parts of the seven kingdoms, interspersed with the odd big battle (more on this below).

The omens in the opening episode of the sixth season are not terribly auspicious, but given how many threads this episode had to pick up, the flat storytelling is forgivable. If the series is going to hang on to its bloody televisual crown, though, the writers need to start tying up some arcs and bringing major characters together. So what do we know after episode one?

Jon Snow is dead. Or is he?

Earlier, in our state of the seven kingdoms address, we predicted that Jon Snow (Kit Harington) would come back in some shape or (undead) form. After this first episode, we stand firmly by that prediction. Melisandre (Carice van Houten) and her witchy skills are going to come into play, and surely it’s only a matter of time before she gets all Dr Frankenstein on his body. (Not for the first time are we shouting “hurry up” at Game of Thrones.)

There was one teasing hint when his body was lifted from the snow – did the only decent man in Westeros, Davos (Liam Cunningham), spot something, and did those bloodstains look a little like dragon wings? Has Snow been left behind in the . . . cold, and is a new version of Jon Stark about to emerge?

Perhaps the most troubling aspect is that the dead-or-alive arc continues, and could for some time. Here’s hoping they either bring him back to undeath in episode two, or give him a decent burial. Neither us nor Ghost the dog can take much more of this.

Failing all of that, we predict a Weekend at Bernie’s style episode, where Snow’s allies try to convince everyone that Snow is still riding high through some hilarious japes involving tasteless if effective corpse puppetry.

The Wildlings aren’t done yet

Early in the episode, Davos has one of his allies flee to round up some help. The Wildings are the obvious choice and would no doubt jump at another chance to knock lumps out of the Night’s Watch. And speaking of allies . . .

The only person who can unite a northern army, at least according to Roose Bolton (Michael McElhatton), is Sansa Stark (Sophie Turner). She’s now marching north to find Jon Snow, admittedly with an army of, well, three. Still, if she realises her ability to rally the troops, the Night Watch might find themselves with much more to deal with than Free Folk.

Come in Ramsay Bolton, your time is up

Ramsay Bolton (Iwan Rheon) got one of his most chilling sequences yet, where after mourning the loss of Myranda (Charlotte Hope), and vowing to avenge her death, he then advised her corpse be fed to the dogs. He’s a character utterly devoid of charm, charisma or humour, and even his dad Roose seems entirely unimpressed. His comeuppance can’t come fast enough, and god be with the days when you had King Joffrey (Jack Gleeson) to hate on. Off with his head, already!

Predictable turn of events number one

Brienne of Tarth (Gwendoline Christie) finally gets to rescue Sansa and set up their alliance. That only took forever.

Melisandre is actually an old crone and the Lord of Light does wonders for the skin. It’s more than a little disappointing to find that Melisandre – a strange, eerie and unsettling character who is as difficult to get to grips with as Lady Macbeth, and all the better for it – seems at least partly to be in the game to maintain something as obvious as her looks.

Couldn’t her motivations be just about power, like all the men around her? Maybe that’s a hasty read on the last scene, but it seems a little tired and obvious that she’s been Dorian Gray all along.

Margaery v Cersei is far from over

There is a sliver of opportunity for Margaery Tyrell (Natalie Dormer) to get out of the Sept of Baelor by siding with the crazy fundamentalists. Margaery works unpalatable angles for political means with such finesse, she would make Donald Trump blush. Don’t be surprised if she hops on this one too.

The big gamble here, though, is it sets her directly back on a collision course with Cersei (Lena Headey), which sounds much better than UFC 200.

Expect this Lannister to repay his debts

Jaime Lannister (Nikolai Coster-Waldau) has had one of the most interesting character arcs in Game of Thrones. He also seemed to have developed something approaching a conscience and maybe even a soul. With the death of Myrcella (Nell Tiger Free), this all seems to have been washed away. And where Cersei appears to be wavering, Jaime is digging in, and vowing to take back everything that has been taken from them, while the rest of the world burns.

Still, though, he’s not the sharpest tool in the box. “She was good,” says Cersei of their daughter. “She was sweet. I don’t know where she came from. She was nothing like me.”

Daenerys Targaryen’s attempts to found a radical socialist, feminist Republic have gone awry – but a true Cumann na mBan-style government is shaping up in Dorne where power has been seized by Ellaria Sand (Indira Varma) and her offspring.

Meanwhile Daenerys (Emilia Clarke) finds herself right back at square one, among the Dothraki horde. Oh for the love of Monopoly. She’s been talking a great game for five seasons while achieving sod all and now all her ships are burning in the harbour of Meereen, while she faces being returned to live with the other war widows in some sort of Dothraki Legion of Mary.

Could this be a feminist alliance worth making? Also, get your damn dragons in the game and do something with them already. Hurry up!

Arya Stark (Maisie Williams) was one of the best things in Game of Thrones. A convoluted plot that is given to True Detective-style psycho babble is doing her no favours, though, and now she seems set up for a storyline that shadows Netflix’s major misfire Daredevil.

Among those last seen wandering pointlessly around parts of the seven kingdoms are: Tyrion (Peter Dinklage) and Varys (Conleth Hill); Daario (Michiel Huisman) and Jorah (Iain Glen); Samwell (John Bradley-West) and Gilly (Hannah Murray); Drogon the dragon; the magic children; Petyr Baelish (Aidan Gillen) and a giant army; and loads and loads of zombies. To all of which we collectively say, hurry up.

The article was amended to correct spelling errors

What does theatre look like streamed directly into your home?
5