Within weeks of its election a minority Fine Gael-Labour government announced an emergency budget, with Taoiseach Garret FitzGerald warning that we were living beyond our means, as Frank McDonald reported 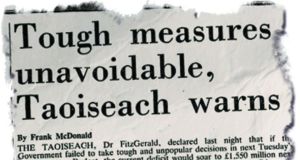 The Taoiseach, Dr FitzGerald, declared last night that if the Government failed to take tough and unpopular decisions in next Tuesday’s supplementary Budget, the current deficit would soar to £1,550 million next year, borrowing would rise to a staggering £2,600 million and confidence in the Irish economy would be lost.

In an exceptionally grim Ministerial broadcast on RTE radio and television, he said the new Coalition Government has been left with “desperate problems” which it intended to confront, not ignore. The most serious underlying problem was the “very critical” state of the public finances, which Ministers had found to be “far, far worse than we had reason to believe.”

Basically, Dr FitzGerald said, the nation was living far beyond its means, borrowing vast sums of money from abroad, the bulk of it to cover day-to-day expenses, with little enduring benefit for the people in the long-term. The Government would have to put right “the economic disorder we have inherited” before it could begin to implement its own programmes.

As a result, the income tax cuts and tax credits for housewives that were such central features of the Fine Gael election programme will not now take effect until next April, at the earliest. However, the Taoiseach confirmed that the Government intended to go ahead immediately with the youth employment programme – ironically, a Labour party scheme.

Dr FitzGerald said there were no easy options, but he was determined to keep his promise to tell the people the truth. Although he spoke of having inherited the present mess from the previous Government, he did not once mention Fianna Fail or place the blame directly on his predecessor, Mr Haughey. It was a message free from political rancour and controversy.

Earlier, he told political correspondents that he did not want the crisis to be seen as a party political matter. By depoliticising it as much as possible, he was seeking broad support from the people for the package of measures to be unveiled next Tuesday. “We are trying to get the country behind us, to support the decisions which need to be taken”.

The Taoiseach said it gave him no pleasure in his first three weeks in office to be the bearer of such bad news. But he emphasised that the economy would not survive if the Government did not take corrective action. “We have no alternative” he declared. “We are doing it to save the economy and the Dail can support the measures or not, as it sees fit.”

Even if the very survival of the Government depended on it, they could not shirk taking the decisions that needed to be taken. They would be failing in their duty and the consequences would be “very grave indeed”. Confidence abroad in the Government and in the economy would be undermined and there would be other damaging effects, as yet unquantifiable.

Dr FitzGerald said the Government’s budget deficit would rise to £1,550 million next year even if there were no change in the Irish pound exchange rate, no special pay increases in the public services, no rise in Civil Service employment, no increase in non-pay expenditure and no changes in income tax rates and allowances.

Dr. FitzGerald said that, despite the Government’s minority position, he was “pretty confident” that the Dail would accept the Budget measures. He felt the gravity of the situation would be evident to the five independent deputies who hold the balance of power and they would all be approached before the Dail meets in an effort to win their support.

Some indication of the Government’s difficulties came last night when Mr Joe Sherlock, the SFWP [Sinn Féin the Workers Party] deputy for East Cork, said on RTE that he would “totally reject” any effort to cut the deficit by imposing further hardship on PAYE workers. He urged the Government to introduce capital taxes, to raise £300 million, saying that the rich must be made to pay for the deficit problem.