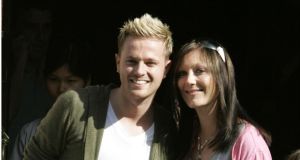 Former Westlife singer Nicky Byrne is to replace Colm Hayes on 2fm. Byrne will present the 11am to 1pm slot, taking over from Hayes who moved there in the shake-up that followed the death of Gerry Ryan.

Hayes has been axed from the slot even though the latest JNLR audiences figures for The Colm Hayes Show show the audience has risen by 3,000 year on year to 134,000.

RTÉ made the announcement this evening. A RTÉ spokeswoman said Hayes will be staying at 2fm but in a different slot.

Byrne has been branching out into broadcasting in recent years after retiring from Westlife.

He has presented the RTÉ show The Hit, took part in the BBC series Strictly Come Dancing and filled in for Ryan Tubridy on 2fm in May of last year.

The announcement is the second in the week as new controller Dan Healy seeks to revamp the troubled station.

In a statement released through RTÉ, Dan Healy said he had been talking to Nicky Byrne since arriving at the station.

“I believe that Nicky will appeal to young audiences through instant likeability and humour. Following our breakfast show announcement last week Nicky is the latest high profile bagging for 2fm....watch this space,” he said.

Byrne said Healy had “amazing plans and vision for the station moving forward and it is very exciting for me to be part of those plans.”

He described it as a “massive opportunity ... in which I hope I can deliver on forming a successful relationship with the station for many years to come. Now it’s time to start planning, developing and presenting my new show and I really can’t wait to get chatting to our listeners nationwide daily.”

Byrne will start in the new slot in the coming weeks. Other announcements about changes to the 2fm schedule will be made soon.