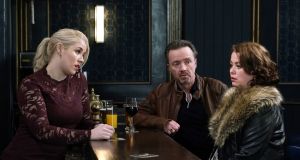 A still from an April 2020 episode of Fair City, before production on the soap opera shutdown due to Covid-19

RTÉ has announced it will restart production on Fair City in September and will feature storylines about Covid-19.

Speaking on RTÉ’s News at One, series producer Brigie de Courcy said all storylines, which had been planned until the end of 2020, were paused in April, and were now to be replaced with new plots to incorporate the pandemic.

The series producer said an upcoming storyline will feature a young couple who began their relationship during lockdown and have spent the past six months living in a small apartment together.

RTÉ said it will be following new procedures for cast and crew, to ensure adherence to Government and Health Service Executive workplace safety guidelines.

De Courcy said the priority for a return to production was the health and safety of the crew.

“It has been our priority that these systems were in place before committing to a return date so that we could protect the health and well-being of our actors, writers, directors and crew.”

According to de Courcy, the cast will be kept two metres apart on screen to adhere to social-distancing requirements, by holding ladders, being on bicycles, and other such devices.

The last recorded episode of Fair City aired on April 12th, before further filming was prevented due to the pandemic.

The broadcaster said it would review all practices to respond to any new guidelines from the HSE.