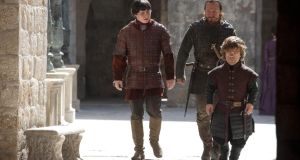 Ninety minutes on Monday night seemed a long time to be stuck in fantasy land for someone like me who has a horror of novels that involve a map, daft names and dragons. George RR Martin’s cult reads have all that and much more, and they have spawned the phenomenally successful HBO-made Game of Thrones , of which the third series began this week.

As it’s on Sky Atlantic it arrived with such a mountain of hype that at some point even I knew I might as well give in and watch it. There’s no handy “previously on Game of Thrones ” five-minute digest: this is a series that expects a knowing loyal audience. That’s not a lot of use if you last dipped into Game of Thrones in series one and had a vague memory of extreme violence, women in medieval dress – or undress – hairy men with animal pelts as scarves and a cast of thousands.

The opening scene showed a chubby bloke fleeing through a snowstorm who is saved by a troupe of fighters who set fire to his foe and who weren’t pleased when he admitted he hadn’t “sent the ravens”. I’d no clue what that meant. But it looked stunning, epic even, right from the off, and tense and foreboding.

Then a string of short sharp scenes piled on each other, snapshots bringing the characters and their scheming ways into quick focus. The scene in which the demoted and battled-bruised Tyrion (Peter Drinklage) – so good, reason alone to watch – meets his father, Lord Tywin (a stately and sinister Charles Dance), was the most straightforward, not least because of the direct plot exposition revealing the vulnerability of Tywin’s sprawling kingdom but because of the vicious antipathy between father and son. And it was cheering to see not just Northen Ireland as a location, but Irish actors including Liam Cunningham, Michael McElhatton, Aidan Gillen and Ian McElhinney doing such good work.

There wasn’t much of the legendary Games of Thrones gore, though slicing off the nipple of a soldier as a test of obedience was an wince-making as it was inventive. A CGI giant and dragon fulfilled one fantasy and a gratuitous sex scene, in which a topless woman begged a man to remove her thong with his teeth, tried to fulfil another.


Rural poverty
There was nothing fanciful in The Village (BBC One, Sunday) just scene after damp photogenic scene of rural poverty in Derbyshire in 1914. It made for sober Sunday-night viewing. This is the first six-part instalment of what the writer, Peter Moffat, hopes will be a 42-part story of a century told through one village: similar to Heimat , Edgar Reitz’s epic German saga.

Set at the same time as Downton Abbey , The Village couldn’t be more different, concentrating as it does on a poor rural family, the Middletons: dad (John Simm) an abusive alcoholic; mum (Maxine Peake), downtrodden, timid; older son, Joe (Nico Mirallegro), who works in the big house and young Bert (a powerful debut from Bill Jones). It starts, v érit é style, with an old man talking to camera remembering when he was 12 and for the first time a bus came to the village. By the end of the first episode, as his story came to life, it was far from the Hovis ad it looked set to be – with domestic abuse, poverty, alcoholism, hunger, demented toffs and a sadistic schoolteacher. When the first World War was declared and Joe marched off to fight, it was almost light relief.

Charlie Murphy (last seen as a very different character in Love/Hate ) played Martha, the preacher’s daughter, who stepped off the bus and brought not just a splash of colour with her red coat but a whiff of modernism from the outside world. A dappled walk down memory lane this isn’t.


Quirky charm
Since it began in the late 1990s I’ve had a soft spot for Jonathan Creek , a mop-haired Columbo in a duffle coat played by Alan Davies. The attraction has been its quirky, family friendly charm – a magician lured into solving puzzling murder cases by a slightly daft collaborator who was first played by Caroline Quentin, then Julia Sawalha and now Sheridan Smith.

Written by David Renwick ( One Foot in the Grave ) it balanced humour with corny but old-fashioned sleuthing. But its feature-length Easter special, The Clue of the Savant’s Thumb (BBC One, Monday) strayed from simply terrible into numbingly boring with its implausible parallel yarns – the dead man in a locked room and a death 50 years before in a convent school and the rubbish resolution. Joanna Lumley’s badly fitting wig sitting like a manky polyester floor mop – was the most plausible thing about this hopeless fandango.


Online poker
Director Ross Whitaker’s fascinating and at times jaw-dropping documentary The Gambler (Setanta Ireland, Friday) followed a 27-year-old Dubliner, John O’Shea, from the big Irish poker tournament to the World Series in Las Vegas. In between O’Shea played poker online and in one week he won €100,000. “If you don’t spot the sucker in the first few minutes, you’re the sucker,” he said in his calm, likable, win-some-lose-some way.

He still looks and talks like the KPMG young accountant he was before he jacked it in to become a professional gambler and, not surprisingly, his mother would like him to get a job, any job “even McDonalds”. Then he took that €100,000 and bet it all in a day on rugby and the Champion’s League.

Local bookies in his leafy Dublin suburb – he owns his own house – won’t take his bets, so he was on his bike dressed, he said, like “a drug dealer”, carrying wads of €50 notes in his trackie bottoms and placing bets of €10,000 a time with bookies in Tallaght and thereabouts. No questions asked. He lost it all. Then he spent last summer in Vegas losing €350,000 before coming home to “grind it out again playing online poker”. He was so calm in this intimate, well-made and low-key film, the lifestyle looked sort of tempting. Sort of.


Ones to watch: Matters of life, death and advertising
All the main characters are back – apart from Jared Harris who, as Lane Pryce, met a tragic end last season, for the sixth series of Mad Men (Sky Atlantic, Wednesday). Pour yourself an Old Fashioned and see how the ultimate 1950s guy, Don Draper (Jon Hamm, left), handles the last years of the 1960s.


Fly-on-the-wall medical documentaries are as common as colds, but 24 Hours in A&E (Wednesday, Channel 4), filmed in London’s King’s College Hospital, is the most compelling.