Do you download illegally? Are you morally okay with that?

Film and music fans reveal their downloading and streaming habits 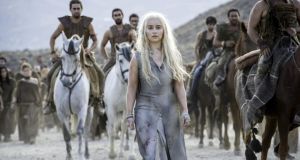 A scene from season six of Game of Thrones, one of the most pirated shows in history. “In order to watch Game of Thrones I’d need to pay for a Sky subscription for a year. But I can’t get Sky because of my location”

The movie industry can sell you almost anything except, it seems, the notion that if you want to watch it you have to pay for it. Pirate content is back in the news with a court case by the Motion Picture Association, which represents Disney, Paramount, Sony Pictures, Twentieth Century Fox, Universal Studios and Warner Bros, against nine Irish internet service providers or ISPs.

The association told the Commercial Court that the streaming site WatchSeries had two million Irish visitors in October 2016; Primewire got 1.26 million, and Movie4k had 200,000 visitors. It wants ISPs to block access to these sites. But while downloading content from torrent sites is illegal, the legality of streaming from sites like these is more ambiguous.

What’s clear is that, as internet access and speeds have improved, streaming of video has overtaken downloading via illegal torrent sites. According to the UK firm Muso, almost three-quarters of 78.5 billion visits worldwide to video piracy sites in 2015 were to streaming sites and just 17 per cent to torrent sites.

Subscription-based streaming is booming too: Netflix signed up 7.1 million new customers globally in the last quarter of 2016, and RTÉ experienced a 74 per cent surge in live streaming last year.

The Irish Times has spoken to a range of people, anonymously, about their viewing habits. A picture emerges in which choice is paramount and in which legal or ethical issues – and even cost – matter less than the availability of good content.

“I use Kodi, an app on an Android box that plugs into the TV. It links to streaming websites. We usually watch movies we have paid to see in the cinema already so I don’t have any ethical concerns. If these sites go I’ll just use a Ttor browser – like a Google browser, only it’s used to access the ‘dark web’, an unregulated internet. You can search for anything, and it’s mostly untraceable with a virtual private network. I’m a techie, and I know what to do, but it’s a very dodgy place.” – bookkeeper and mother of three, 43

“I use Netflix, Apple TV and Google Play, and I had HBO Now and Amazon Prime TV subscriptions when I lived in the United States. Unfortunately, you can’t get HBO Now here. I’m happy to pay: it’s guilt-free and I feel that if we want great content somebody has to pay for it. Artists should be rewarded for their work. That said, prices for downloading movies and box sets are too high.” – communications consultant and father of three, 47

“Whether or not I pay for content depends on my perception of the value for money. It’s really not about the cost. On iTunes, TV box sets are reasonable, so I pay for them. Movies are a different story. I’ll happily pay €20 to €24 for two of us to see a movie in the cinema, because of the experience we’re getting. However, when I see a movie costing €15 to €20 to download I think again. So what I do is rent the movie on iTunes. I then use software that removes the digital-rights-management licensing and allows me to watch it later. Technically it allows me to watch it forever. My wife hates it, but I’m morally okay with my choice. I don’t produce illegal content for others. I consume illegally uploaded content only as a last resort, and I do pay, just at a lower price point. If they push the price point down for each movie more people will pay, and they’ll make more money. The economics are there. They’re just not getting it.” – senior technology executive and father of one, mid-40s

“I mainly watch TV and movies using Netflix and streaming sites. Through Kodi you can access a much wider variety of shows. Streaming sites do have numerous issues. It might be slow to stream, causing buffering, or the link might drop. Netflix, by comparison, runs faster. Honestly, I’d much rather pay if I could get everything I wanted. In order to watch, say, Game of Thrones I’d need to pay for a Sky subscription for a year. But I can’t get Sky because of my location.” – IT industry executive, 32

“I am an honest citizen when it comes to paying for Netflix. But as the movies here are only a fraction of those available on Netflix in the US, I use a virtual private network, which I pay for monthly, to fool Netflix into thinking I am a US customer. Netflix recently cracked down on VPNs, but you can still get around that. I download movies from PirateBay too. If you use Piratebay your IP provider can see what you’re doing. They can’t if you go through a VPN.” – retired man, 60s

“I used to download everything using torrents, but the good sites keep disappearing. It’s just getting harder to find content, so I’ve stopped doing it out of laziness mostly. I don’t even slightly have any moral or ethical concerns about it. When I really want to see something like Game of Thrones I’ll make it my business to find it, but otherwise we use Netflix. – arts manager and father of two, 30s

“I refuse to use illegal streaming. We watch nearly everything on DVD, Netflix or Apple TV. There are no adverts, and the internet speed is good quality, so there are no dropouts or streaming delays, which my son, who has autism, could not cope with. As a co-creator of an app created for people with special needs I’m extremely sensitive about paying for quality content. The bands I grew up with wouldn’t even get on the first rung of the music business now because no one wants to pay for original content.” – part-time social entrepreneur and mum of two teenagers with autism, 48

“I tried a couple of streaming sites. The moment I opened one on my laptop I got a pop-up with a scam on it. I disliked the whole feel of it, and was worried I could be left wide open to viruses. I recently signed up to Volta.ie. It has a pretty good range of international films I missed at the IFI and Lighthouse. It’s the best legal option I could find. Illegal streaming is damaging the film industry, not least in terms of job losses. And most feature films are meant to be seen on the big screen. To me it’s unthinkable that someone could stream a film before it’s even been released at the cinema. Watching a film on a phone? Wrong.” – teacher of English, special educational needs, and film studies, 44

“On occasion I may torrent a movie if it’s not available on legal platforms. I mainly stream sports events. The advantage of streaming is that I get to see content I wouldn’t otherwise. The disadvantages are that good broadband is required, some technical skill, and you need to be proactive about protecting yourself from malware and browser hijacks. As legal models develop, and become more cost-effective, I could see myself leaving behind some of the methods. At this stage I don’t see how the ISPs can clamp down on streaming. With VPN services and Tor clients they are already behind the curve. You only have to look at silly stuff like how movies are released around the world on a phased basis to realise that the industry has a lot of catching up to do. – engineer, 40