The black comedian has two new specials on Netflix. But is he a secret conservative? 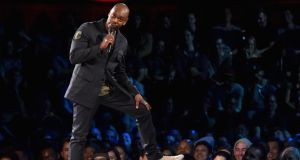 Nobody likes to feel left out of a joke, but it takes a particularly erratic comedian to makes you side with his hecklers.

Late in the first of two comedy specials (The Age of Spin and Deep in the Heart of Texas, Netflix, now streaming), a very lucrative return to “levity and livelihood” for Dave Chappelle, following 13 years in the self-imposed wilderness, the American stand-up interrupts a stream of incongruously light-hearted gags about the staggering number of Bill Cosby’s alleged rape victims to recall a moment of rebuttal.

“You are a fu*king asshole for saying these things,” implored one woman, stridently enough to make Chappelle feel bad, but not persuasive enough to make him reconsider. “I’ll be honest,” the black comedian says of his white heckler, “race was involved.”

How could it not be?

Impish, enjoyably self-aggrandising and deeply nostalgic, Chappelle works a practiced line on race, gender, sexuality, family, money, weed and trouble with law enforcement; in short, the frantic tapestry of modern America. Sometimes he can be especially arch, slipping in his stiletto with a grin. Marvelling at the diversity of his live show crowd in The Age of Spin, he notes: “Obviously, black people have slower internet connections.”

Elsewhere and often, though, Chappelle’s jokes are at the expense of the long victimised, most frequently, women, gays and trans. And so he comes off like the aggressor’s jester, an apologist for abusers.

On Ray Rice, the disgraced football player recorded punching his wife in an elevator, Chappelle marvels: “She shouldn’t have rushed him.” Of one awed encounter with OJ Simpson, with a much tighter command of irony, he tells his appalled white colleague: “Sharon, with all due respect, that murderer ran for over 11,000 yards.”

At such moments – and there are many – the laws of comedy are easily invoked.

1. A comedian does not necessarily mean what he says.

2. A comedy venue is protected space for the profane and unpalatable (even on streaming television).

3. Laughter – much like a retweet – does not mean endorsement.

Moreover, Chappelle’s material, like his outlook, thrives on cognitive dissonance. Can he overlook ethnic profiling so long as his fame protects him? Can basic drives override loftier principles every time? Can horrendous people still be remembered for great achievements?

Recorded a year apart (the more muted Texas was filmed early in 2015, the amped-up Spin in early 2016), these specials have already been overtaken by recent events. Neither is quite as sharp as Chappelle’s hosting of Saturday Night Live in the week of Trump’s election, and another Netflix special is being recorded this year. Here he routinely refers to middle age (he is 43), speaks longingly of a simpler past, and dwells on assorted imagined threats to his masculinity.

It would be easy to write Chappelle off, then, as an unlikely conservative, railing against the discomforts of change. But it is worth noting that, at one point, he speaks witheringly and witlessly about the Ps and Qs of engaging with a trans person: “Is it fair that I have to change up my whole pronoun game for this muthafucka?!”

Just a year later, while pining for his childhood hero Bruce Jenner – now Caitlyn – Chappelle’s pronoun game has indeed unfussily adapted. It’s a little thing, and it won’t make him seem any funnier to prospective hecklers, but Dave Chappelle is slowly getting back into the swing of things.

These two sisters turn four and three on February 29th – or should that be 16 and 12?