Dancing with the Stars: not what the doctor ordered as Eva Orsmond voted off

Dancing Dessie Danger Cahill stays in, and Des Bishop gets a standing ovation for his cha-cha-hip-hop routine 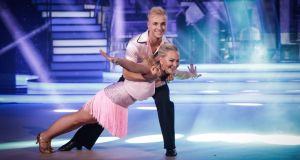 Dr Eva Orsmond is the latest celebrity to be voted off RTE’s Dancing with the Stars, and while she was at the bottom of the judges’ leaderboard last week alongside Teresa Mannion, it’s still a shock that she has exited so early on in the competition.

Even though the Operation Transformation weight-loss expert is probably the most serious personality in the competition, she claimed in rehearsals that she was “too wild” for ballroom and that the cha-cha-cha is more her style. While she had a great opportunity to lighten up or go wild this week, she did not take it and the tension between her and her partner Sean Smullen impacted her performance.

On the judging panel is BBC Strictly Come Dancing’s Darren Bennett, sitting in for Julian Benson who is at home sick, alongside regulars Brian Redmond and Lorraine Barry. The trio demand perfection this week, and they got it. Sometimes.

The judges place Denise McCormack at the top of the leaderboard this week with 27 points. Dancing the samba to Sia and Sean Paul’s Cheap Thrills, the Red Rock star and Ryan McShane are all a-glitter and twerking in gold. God save us. Despite McShane being diagnosed with tonsillitis during the week, the judges are bowled over by their performance and Brian Redmond compliments their voltas and botafogo as if they’re moves we should all be pulling.

Following last week’s criticism that she has less bounce than a one-legged kangaroo, Katherine Lynch is determined to prove the judges wrong. Bennett describes her foxtrot with Kai Widdrington as soft, feminine and demure, and Barry says that her moves “gave us a glimpse into her soul”, which is worth 22 points to be precise.

The Kingdom's King of the Ballroom! Well done @GmailMahony you certainly brought your A game tonight... a fantastic Foxtrot #dwtsirl 👏💃🏻🍾 pic.twitter.com/kHhAmeocxQ

Wow wow wow @Desbishop has arrived on #DWTSIrl and his partner omg... that body!!! God love the rest of us!!!

Sports pundit Des Cahill declares that he wants a “proper score for proper dancing”, so with his partner Karen Byrne, he dances the tango to Billy Fury’s Jealousy with nary a gimmick in sight. Even though Bennett says that his tango has “more walking than stalking”, everyone is terribly fond of “Dancing Dessie Danger Cahill”, as presenter Amanda Byram calls him, and he walks away with 18 points.

Channelling everyone’s mam after a few pinot grigios, news correspondent Teresa Mannion injects her salsa with a dose of disco as her partner John Nolan twirls and swirls her around the dance floor to Earth, Wind and Fire’s Boogie Wonderland. For the past couple of weeks, Mannion has been skating at the bottom of the judges’ leaderboard but as long as she has the public on her side – she does – she will be safe.

Boyband star Dayl Cronin and his partner Ksenia Zsihotska do their best Liesl Von Trapp and Rolfe impression as they take on the Viennese waltz to Goo Goo Dolls’ Iris. Bennett congratulates dancer Zsihotska for turning Cronin into a man, which is hardly her job, but this maturity stands to them as they are awarded 26 points.

In stark contrast to that sickly-sweet performance, Fair City’s Aoibhín Garrihy and her partner Vitali Kozmin go against the waltzing tradition for a dark spin to Ariana Grande’s Dangerous Woman, which Barry describes as superb. They are placed in the top half of the judges’ leaderboard with 25 points.

Dessie Bishop is more daring than Dessie Cahill this week as he sprinkles some hip-hop on his cha-cha-cha, knowing full well that Brian Redmond despises hip-hop dancing. This bold move works in his favour, and his cha-cha-hip-hop hybrid to Uptown Funk earns him and Giulia Dotta a standing ovation and 24 points.

Well, if footballer Aidan O’Mahony lacked charisma last week, he certainly makes up for it this week. Miming along to Michael Buble’s version of My Baby Just Cares For Me, O’Mahony and partner Valeria Milova put the effort in to make this American smooth foxtrot as smooth as it can possibly be. According to Bennett, O’Mahony’s combination of masculinity and sensitivity is impressive and the judges give him a generous 21 points.

It’s fair to say that it’s anyone’s game now on Dancing with the Stars. As the competition strengthens and the fanbase for Des Cahill gets stronger by the day, our remaining eight couples have to dance like their lives, I mean, salaries depend on it.