Coming soon: say 'Hayu' to more trash TV than you could ever possibly want

New video-on-demand channel Hayu aims to bring Irish viewers the likes of Keeping Up with the Kardashians, The Real Housewives and RuPaul’s Drag Race's 24 hours a day 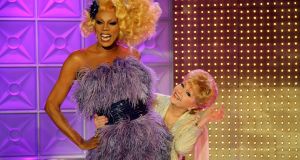 Are you a fan of reali-tee TV? Then glad tidings for you unapologetic anthropologists and car-crash Kardashian watchers. A new subscription video-on-demand service (or SVOD, as no one will ever call it) launches in Ireland this March, promising just what the world needs – more trash TV.

Hayu from NBC Universal brings us “all-reality, all-day”, perfect when for when you have the mother of all hangovers and you can’t focus on anything more challenging than Millie from Made in Chelsea’s hair.

Hayu has 3,000 episodes worth of reality shows to call on - including Keeping Up with the Kardashians, The Real Housewives, RuPaul’s Drag Race – the show that brought the world the “Snatch Game”– The Millionaire Matchmaker and Don’t Tell the Bride.

If you’ve never seen the latter, here’s a run down: bride tells groom she wants a traditional cathedral wedding followed by Tuscan-style reception and a muted colour palette; groom arranges marriage at a paintballing park followed by hot dogs with no bun because he blew all the budget on the his astronaut-themed stag.

Reality TV was once heralded as an exciting, unpredictable form of observational media. Mainly though it’s become seen as the beginning of the end: it’s base, barbaric and disturbing, which says as much about us its audience as it does about its subjects.

Big Brother was accused of turning us into creepy voyeurs; X Factor made us all nasty little Simon Cowells, revelling in teenager’s tears. Other critics lambast the fact that so much reality is scripted and how networks actively manipulate their “stars” and viewers to boost ratings (see Jersey Shore’s Snooki getting sucker-punched).

With 500 more episodes promised each year, and at €4.99 a month, the makers of Hayu say “it costs less than a lipstick” and the subscription is no contract, unless you count the one you’ve made with the devil.