Claire Byrne isn’t easily silenced. But this left her lost for words

Radio: The RTÉ host heard from Erin and James McClean about their anti-Irish abuse 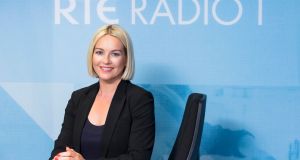 Claire Byrne talked to Erin McClean, wife of Republic of Ireland soccer international James McClean, who described the abuse suffered by her husband on social media and beyond. Photograph: Andres Poveda/RTÉ

As a tenacious interviewer unafraid to tackle the great and the not-so-good, it takes a lot to silence Claire Byrne. But there she is, on Wednesday’s Today with Claire Byrne (RTÉ Radio 1, weekdays), straining to be heard, uncharacteristically spluttering in frustration: “Excuse me, I beg your pardon!” The culprit for the host’s discombobulation is not some recalcitrant politician but a more formidable (if less slimy) opponent: a frog in her throat.

“Forgive my voice. I don’t know quite what’s happened,” she says apologetically. Within seconds, normal service has thankfully been resumed. It would be unfortunate if Byrne lost her voice this week in particular, as she’s been hitting the right notes.

As it happens, the show’s most compelling item features a guest who refuses to stay quiet in the face of intimidation. Byrne talks to Erin McClean, wife of the Republic of Ireland soccer international James McClean, who speaks out about the abuse her husband suffers on social media and beyond. The Derry-born footballer, who plays for English club Stoke City, has long been the target of threats because of his refusal to wear a poppy during Remembrance Week, but the latest round of online abuse prompts Erin to describe the toll on her and her family.

Erin and her husband, James McClean, are not anti-British: England is their home, after all. ‘We’re just a family over here trying to make a living for ourselves,’ she tells Claire Byrne

The hate speech is sickening. After recent threats to burn down the McCleans’ house with them in it, Wednesday morning brings forth a message expressing preference that James be set alight in front of his children. Again, Byrne is lost for words, understandably struggling to express her outrage. “How do you put up with that?” she eventually asks. Erin, though now used to threats aimed at James, is taken aback at the vileness directed at her children: “It blows my mind.”

Her husband is not anti-British: after all, England is their home. “We’re just a family over here trying to make a living for ourselves,” she says plaintively. Byrne similarly keeps her focus on the human side of the story, rather than try to ascertain why anti-Irish abuse seems to be taken less seriously in English soccer than racist language does.

Erin is then unexpectedly joined on the line by James. He brings another dimension to the item, expressing guilt at what his wife has to go through. Byrne also adopts a slightly different tack, quizzing James about his own social-media lapse when he posted a photograph of himself in a balaclava with his children.

He calls the post “an ill-advised jibe”, voicing annoyance that it gave his tormentors justification to continue their trolling. But he also puts his actions in the context of the abuse he’s endured for nine years. “Put yourself in my shoes,” McClean says. “Some day, right or wrong, you’re going to react.” Far from undermining her guest, Byrne’s questions underscore the intolerable pressures faced by McClean.

In each instance, the weapon of choice is the scalpel rather than the hatchet, but the points are well made. Byrne’s approach isn’t flashy, but you don’t always have to shout to make yourself heard

It’s a powerful piece of radio, which benefits from the immediacy and intimacy of the setting: it has the flexibility to allow James to join the conversation, while the unvarnished timbre of the McCleans’ voices brings home the emotional impact of old prejudices being given fresh life.

Byrne handles the interview deftly, but it’s not the only highlight of the week, as she hosts items that implicitly question the bullish official narrative on vaccine rollouts. On Monday she hears Dr Stephen Murphy, a GP, express frustration at not being allowed to inoculate patients in large (and more efficient) spaces like parish halls, a prohibition that sounds suspiciously like bureaucratic punctiliousness.

The following day Barry Lenihan reports from the Donegal-Derry Border on the disparity between vaccination rates north and south. As interviewees from the Republic talk jealously about relatives in the North who have already received the jab, Government spin about the vaccine programme’s seamless progression sounds increasingly hollow.

In each instance, the weapon of choice is the scalpel rather than the hatchet, but the points are well made. Byrne’s approach isn’t flashy, but you don’t always have to shout to make yourself heard.

Over on Lunchtime Live (Newstalk, weekdays), host Andrea Gilligan similarly eschews theatrics, though her style is less meticulous interrogation than sympathetic chat. With her soft accent and homely pitch, Gilligan has put her own stamp on the afternoon phone-in show, so that its Liveline-light format sounds more like a conversation with an old pal.

This formula doesn’t always work, however. On Wednesday, by way of discussing the documentary Framing Britney Spears, Gilligan talks to a Bray tattoo artist named Badger, who inked the troubled pop star in his studio in 2004. The host heroically tries to squeeze juicy anecdotes about Spears from her guest, who, with admirable professional focus, offers little “insight” beyond the tattoo he drew.

‘There was nothing in particular, to be honest, other than she was a memory,’ the tattoo artist says about Britney Spears – a quote that makes the item sound more exhilarating than it actually is

“There was nothing in particular, to be honest, other than she was a memory,” he says, a quote that makes the item sound more exhilarating than it actually is. Such are the perils of being a phone-in host on a quiet day.

But Gilligan’s genial manner also elicits revealing conversations. She hears from Kennethy, who outlines the problems faced by young immigrant students like himself as they live in overcrowded rentals during the pandemic. He describes the “hard moments” that come when eight people share a house. “You have no privacy,” he says, adding that until recently he paid €420 a month to share a bedroom with two others.

Kennethy’s tone is factual rather than judgmental, but it raises uncomfortable issues, from exploitative practices – most landlords know how packed their properties are, he says – to the obvious implications for social distancing. “Isolation isn’t possible in a situation like that,” Gilligan observes.

It’s a low-key interview, but just one voice can amplify a much wider story.

On Sunday, Brendan O’Connor (RTÉ Radio 1) talks to the philosopher Richard Kearney about his new book, Touch. It’s an engagingly cerebral conversation, discussing the impact of the pandemic on the human instinct for tactility. But at one stage the affably erudite Kearney erroneously calls the actor Brendan Gleeson a “fellow Corkman”, like himself and his host.

O’Connor says nothing until the interview is over. “Look, I know Brendan Gleeson is from Dublin,” O’Connor says. “If I’m lucky enough to have one of the world’s greatest philosophers on the show, I’m not going to interrupt him on some point of fact.” He then gets to the nub of the matter, insisting he’s not trying to claim Gleeson for the rebel county. “Sure, we don’t need to. We have Cillian Murphy.” Truly, you can take the man out of Cork…