Channel 4's Eden: Paradise in the making or hell on earth? 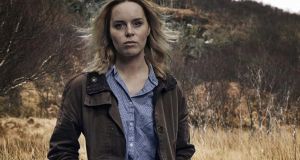 Eden (Monday, Channel 4) is about a bunch of English people who establish a fledgling utopian community in the Celtic hinterland (Scotland). It’s a television experiment that reminds me a little of other experiments the English have engaged in in the past. Like the colonisation of Ireland, for example, which also began as a reality-TV programme (Wassup Bitches? with Henry II).

Now, Eden is possibly named after the place Adam and Eve lived before it was gentrified and they had to move to the outer suburbs, but I suspect it’s actually named after British prime minister Anthony Eden, the man behind the Suez crisis, because it also looks set to be an adventurous folly.

Eventually. If your notions of survivalism involve Bear Grylls drinking urine or Han Solo cutting open a tauntaun in order to survive the icy wastes of Hoth (my sense of survivalism comes from Star Wars), then you may have found some episodes a little slow. Indeed, Eden was initially greeted with a cry of “meh!” from social-media commenters who were upset it wasn’t the sort of fast-forward reality car crash they’d come to love.

This was to miss the point. Eden is slow-motion reality television and like other slow-motion dramas, such as The Wire or American governance, the story arc is bigger and potentially more dramatic than the episodic scandals generated elsewhere.

The participants are not set up to fail. They have real skills. They are carpenters, vets, doctors, gamekeepers, paramedics, fishermen and horticulturalists (there are no social-media consultants, tech entrepreneurs or, bizarrely, TV columnists among them). The only person who seems out of place is Tara, a life coach, who establishes herself as the community masseuse and operates out of a plastic shelter dubbed “the pleasuredome”.

“That’s your opinion, sweetie, you’re entitled to it,” says Tara, passive-aggressively. (One of Eden’s potential exports in the future is passive aggression.)

Wilderness massage
A lot of this episode is taken up with the travails of Tara’s wilderness massage business, general shelter-building and the husbandry of sheep and goats. (In the case of Glenn, a committed goat-nuzzler, I was concerned that it would be husbandry in more than one sense of the word.) But what’s most interesting to see is how camp harmony is as dependent on interpersonal interactions as it is on such practicalities.

Gamekeeper and IT consultant Glenn (he makes more use of the first set of skills than the second – surely he could put together some sort of “internet” out of moss and twigs?) begins this episode delighted by shepherdess Caroline, a woman who doesn’t hesitate to execute a sheep (it had been stealing, I think) or to create a bottle-holder from a lamb foetus. Glenn is captivated.

When Glenn realises Caroline doesn’t fancy him, it all goes a little Heart of Darkness. He befriends a goat, and before long he’s fantasising about culling the weak.

“We can’t carry everyone forever,” he says darkly. “And not everyone is going to make it through to to the end.”

He’s not the only one thinking like this. A small cadre of gung-ho males begin ominously idealising rural depopulation.

“I think if people leave, the experience is going to get easier and more efficient,” says Tom, a sports instructor, who has clearly learned about running society from Ireland’s political elite.

Anyway, I find it compelling. What sort of community will it be when we rejoin them for series two? Will it be an idyllic vista of flying cars and monkey butlers or just fuzzy footage of Glenn, naked and smeared with blood, dancing around a campfire in the dark, much like all the footage we’ve been getting from Britain since Brexit.

This series ends with Tara, after quite a bit of bullying, returning to civilisation and the community erecting a wooden cross with her name on it (I presume she’s not lying beneath it). Then we see preview footage from the next series, including a clip of a burning humanoid effigy (seriously). Who is within this fiery man of wicker? My money’s on a virginal policeman from the mainland. Or Christopher Biggins.

Dubious experiment
In Last Orders with Gay Byrne (Tuesday, RTÉ 1), another dubious experiment in self-governance – the Irish State – is explored. This excellent documentary balances an unsparing history of the religious control of Irish institutions (Mark Patrick Hederman, the abbot of Glenstal Abbey, doesn’t shrink from words like “police state”) with the clear-eyed insights of Byrne, who was educated and terrified by Christian Brothers. He was also, as a broadcaster, part of the liberalising process that undermined such unquestioning religiosity. “We gave them so much power at that time, in that place, it seems to me they became corrupt,” he says sadly.

It’s fascinating, thought-provoking stuff – enough to make you want to go to a wilderness location and start again.

Fleet Foxes: ‘I’m trying to find silver linings in this madness, a healing space in music’
5