The BAI seems to think that impartiality is achievabe in the treatment of current affairs, and that a sanction will achieve or adavance that 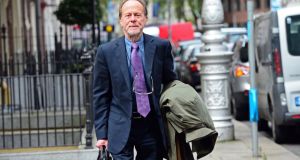 Grappling with “objectivity” and “impartiality” – Bob Collins, chairman of the broadcasting authority, arriving to appear before the joint Oireachtas Committee on Communications, at Leinster House recently. Photograph: Eric Luke

The Broadcasting Authority of Ireland (BAI) has a cavalier attitude to constitutional entitlements. It believes it has no obligation to adhere to constitutional procedures in adjudicating on complaints against broadcasters, and it is dismissive or at least careless about the constitutional right to free speech.

In its adjudication of complaints against presenters, the BAI thinks it has no direct obligation to make presenters aware of the complaints or to hear the presenters’ own response to the complaints before issuing decisions that impinge on the reputation of presenters. This is in clear breach of the constitutional protections that were laid down by the Supreme Court in 1971. I write from personal experience.

In its recently published “Code of Fairness, Objectivity and Impartiality in News and Current Affairs ” there is the following paragraph: “A news presenter and/or a reporter in a news programme may not express his or her view on matters that are either of public controversy or the subject of current public debate.”

This is repeated in slightly different form in part of the succeeding paragraph: “A presenter and/or a reporter on a current affairs programme shall not express his or her own views on matters that are either of public controversy or the subject of current public debate, such that a partisan position is advocated.”

In the way these items are drafted, they clearly seek to preclude presenters and/or reporters, engaged in current affairs programmes, from expressing partisan views on such matters whether on the current affairs to which they are attached or otherwise.

As I am writing this column I have heard Michael O’Keeffe, the chief executive of the BAI, state that these paragraphs do not prevent presenters and reporters from expressing their views outside the ambit of programmes for which they work. If so, the paragraphs concerned are incompletely drafted .

There is a naivety also about the BAI, which seems to think, after a year’s deliberation, that impartiality is achievable in the treatment of current affairs and that a mere sanction on presenters expressing their own viewpoints will achieve that or even advance that.

The very selection of topics to be discussed is itself a product of a particular viewpoint – some issues seem significant to some of us, to others these issues are of little importance and vice versa, depending on our politics. By politics I do not mean political party affiliation, I mean the political opinions or ideologies we hold, whether consciously or unconsciously – all of us has an ideological position, although most are not aware of that.

Then there is the selection of guests for a programme and that too is political. For instance, if you are indifferent to the inequality between the genders in society, then you don’t think it is important to strive for equal balance between the genders on programmes and, of course, vice versa (RTÉ thinks this consideration is irrelevant).

So how can impartiality be achieved since, unavoidably, those that take the crucial decisions on programmes – producers, researchers, reporters and presenters – are themselves suffused with ideological bias, an unavoidable bias?

Bob Collins, the chairman of the BAI and former director general of RTÉ (1997-2003) might have remembered the tangle RTÉ got into in 2000 when it attempted to define the concept related to impartiality: objectivity.

In the RTÉ Programme Makers’ Guidelines there is the following elucidation: “There is a philosophical debate about the possibility of objectivity. Some philosophers argue that everything is subjective and that there are no absolute truths. However, in the practical world of broadcasting the important consideration must be that programme-makers strive to achieve objectivity.”

What Bob and the other brainy fellows in RTÉ were saying in effect was: We don’t really know what this thing objectivity means but, by God, programme-makers had better be objective. Ditto, it seems, impartiality.

Fairness is different and fairness matters. It is fair that viewing and listening audiences know the biases of broadcasters. It is also fair they know of their financial interests and affiliations. For this reason a register of broadcasters’ interests is required – why should those of us who seek to hold public representatives to account not be subjected to the same standards ourselves?

There is more to fairness, to which I hope to return.