A preview for Behind Her Eyes, a new Netflix psychological thriller miniseries based on the 2017 novel of the same name by Sarah Pinborough. Video: Netflix 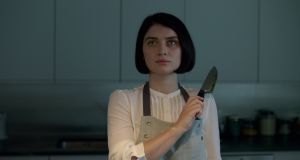 Eve Hewson as Adele in Behind Her Eyes

A woman with stylishly angular hair and unblinking eyes stands at a chopping board, slicing parsley with a zeal bordering on the unnerving. Her husband, all stubble and nervous glares, enters the vast, minimalist and very aspirational kitchen and the woman asks, “Who was that?” He has a question of his own: “Where’s your phone?”

So begins the unsettling teaser – too short to be described as a trailer – to Eve Hewson’s forthcoming Netflix thriller, Behind Her Eyes, released on February 17th. Hewson, the 29-year-old daughter of Bono and Ali Hewson, plays Adele – the housewife at the chopping board with the blank yet scary gaze.

Stubbly McStubble is her husband David (Tom Bateman). He’s a psychiatrist and, as Netflix has already confirmed, is having an affair with his secretary Louise (Simona Brown). The twist is that Louise has also struck up a friendship with Adele.

Behind Her Eyes has the potential to become a binge hit. The teaser has a frayed nerve-ending energy

It’s that relationship that is spooking David in the teaser. Adele indicates, with her chopping knife, that her phone is on the counter. David unflips it (yes, she has a retro flip-phone) and scrolls through the messages, which are seemingly from Louise.

The clip ends with David turning to gawp at his wife, whose chopping now verges on maniacal. Cut to black.

Behind Her Eyes could be a break-out role for Hewson, an excellent actor (her English accent here is immaculate) cursed before now with parts either obscure or badly written. She excelled as a nurse in Steven Soderbergh’s The Knick, but that show, set in a New York hospital in the 19th century, was too strange and understated (and gory) and so went largely unseen.

She suffered from a different kind of exposure problem over the summer when appearing opposite Eva Green in the BBC’s adaptation of Eleanor Catton’s The Luminaries. Hewson was arresting as a young woman emigrating to 19th-century New Zealand. Alas, the series was hobbled by a dreary plot and the baffling decision to film key scenes at the dead of night, which made it impossible to see what was going on.

Behind Her Eyes, by contrast, has the potential to become a binge hit. The teaser has a frayed-nerve-ending energy. You want to know more: about David and his mysterious caller, about Adele’s texts, about the dinner she’s preparing. (Hint: it features a lot of parsley.) Moreover, the 2017 Sarah Pinborough novel from which it is adapted is stuffed with bombshells – so many that reviewers were asked not to give away how the story concludes.

“A tenner says you’ll never guess this ending,” reads the cover blurb. The story is told from two perspectives, those of Louise, a single mother embarking on an affair with the mysterious and debonaire David, after meeting him in a singles bar; and of Adele, the doting wife with a murky backstory.

“Questions, questions, questions,” Louise observes at one point . “It seems that ever since David and Adele came into my life I’ve been filled with questions. They’re like weeds in water. Every time I think I can swim away another one tangles around my legs to drag me back down.”

The Netflix adaptation has pedigree. Simona Brown has appeared in The Casual Vacancy and The Night Manager. And Tom Bateman starred in Kenneth Branagh’s winningly ripe adaptation of Agatha Christie’s Murder on the Orient Express. Overseeing the project is the showrunner Steve Lightfoot, who has worked on the underrated and very weird Hannibal and on the bruising Netflix Marvel series The Punisher.

Hannibal, in particular, had a gift for making the everyday feel uncanny as it told the original story of Hannibal Lecter. But if the Behind Her Eyes teaser has parallels, they are closer to the “fitted-kitchen noir” of shows such as ITV’s Doctor Foster. As with that series, the decor is minimalist, expensive and scrubbed of all traces of warmth or intimacy.

More will be revealed next month, when the six-part drama debuts on the streaming service. What’s already clear is that Behind Her Eyes has the potential to become a binge-watch must-see and a star-making vehicle for Hewson.