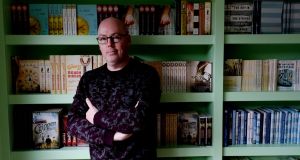 Early on in Celebrity Home of the Year (RTÉ One, Wednesday, 9.35pm), a programme that cunningly combines our nation’s two main subjects of worship, the designer Hugh Wallace regards a beautifully appointed kitchen and decides it’s just not for him. “Unfortunately, that particular orange, I don’t like,” he decrees.

Now, that’s interesting, because he happens to be wearing that particular orange, barely one shade lighter, around his shoulders in the form of a jumper. I can’t imagine the kitchen’s owner, the artist and designer Robert Ballagh, feeling miffed, though. There really is no accounting for taste.

The identity of the homeowner is intended to be a secret, but anonymity is not the programme’s strong suit. (Previous winner, David Norris, kept 17 portraits of himself at home.) “Robert Ballagh is an artist of our times and it’s a real honour to be in his home,” interior designer Deirdre Whelan offers by way of encomium. “I feel very humble to be here,” architect Peter Crowley says of singer Eleanor McEvoy’s bohemian crash pad. “She’s an incredible musician.” It’s odd to see exacting critics become so obsequious so quickly. Bow down, bitches.

I turn, reluctantly, to some description of these homes. Suffice to say they are all magnificent and you cannot afford them. The modest terrace house doorway to Ballagh’s residence, for instance, actually leads to the less modest acquisition of the house on either side. The rooms are as exquisite as you might imagine, with a unified concept of striking concrete fixtures, jagged and rising like the lines of a stock market graph. There are plenty of Ballagh designs about the houses, including a framed collection of his work for the decommissioned Irish pound notes. “We’re definitely in the home of Robert Ballagh,” deducts Wallace, right on the money for once.

Knowing the identity of the celebs in advance, you tend to scour the frame for your own clues into their personalities. John Boyne’s home, for instance, is a well-appointed neverland of bright colours, charming toys, severely limited kitchen and dining space and thousands of books – many of which he wrote. “This is the ego room,” he says of the office that holds all his work. It’s his favourite.

What comes across most forcibly, though, is the taste of the judges. Crowley, forever pitching architectural redesigns, is either convinced that a building is never finished, or hustling for business. Whelan has impeccably good taste, and happily a cogent way of explaining it. Wallace, not so much. But a visit to the McMansion of Dragon Den’s star Ramona Nicholas demonstrates his thing for opulence and ostentation. In the pink cocoon of a little girl’s room, he breathlessly seizes the book This Little Piggy Went to Prada and sighs with contentment.

Perhaps that is why Wallace is so affronted by Crowley’s final mark for this Versailles, a generous eight points out of 10. “That’s a personal choice,” he snips at the architect, with the divine solipsism of someone whose own choices are ordained by god.

Through what seems to be the mutually assured destruction of Wallace and Crowley’s voting, the home of the year is appointed to John Boyne’s detached book repository, and the €5,000 donation directed to his nominated children’s literacy charity, Fighting Words.

In other circumstances a homelessness charity might have struck a more appropriate balance, but on matters of taste and its vexed expression, Fighting Words sounds about right.