There will be floods, zombies and, yes, viruses. Plus this infernal train ride

It’s a rough moment for Netflix to release Snowpiecer, its new future-shock franchise 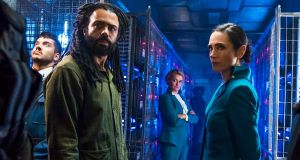 Slow road to nowhere: Netflix’s Snowpiecer reboot is wonderful to look at, but it has nothing to say about life today

Unless we’re counting the Sligo nightclub where Marianne and Connell have their first row in Normal People, it’s fair to say nightmarish dystopias have fallen drastically out of fashion.

The reasons for this are perfectly obvious. We live in an era when a trip to the supermarket or garden centre is nearly as terrifying as the bit in Terminator 2 in which the T-1000 bears down on John Connor in a massive truck. Shrieks, chunks of masonry flying everywhere, shouts of “Hasta la vista, baby” at shocked passersby. And that was just me trying to reverse-park at Lidl at the weekend.

So it’s arguably a rough moment for Netflix to wheel out its new future-shock franchise. Snowpiercer, which debuts on Monday, is a reboot of the 2013 Bong Joon-Ho movie starring Chris Evans and Tilda Swinton.

What had people to worry about in 2013? Brexit was but a twinkle in Nigel Farage’s eye, Donald Trump was that orange man from The Apprentice

Evans played a passenger on a creaking hulk of a train rumbling ever onwards yet never seeming to reach its destination. Surprisingly, this turned out not be a period piece about taking the Cork to Dublin Intercity in 1989, with the entirety of season one set around Limerick Junction. Rather it was an apocalyptic meditation on class, environmental collapse and why Swinton always makes the best baddie.

It didn’t fare particularly well, which is strange. Surely the bleak tone didn’t put audiences off. What had people to worry about in 2013? Brexit was but a twinkle in Nigel Farage’s eye, Donald Trump was that orange man from The Apprentice.

The “Corona virus”, meanwhile, was an affliction suffered by middle-class Dubliners who’d fallen for Danny O’Reilly’s irresistible voice and silky facial hair. There was no vaccine; washing your hands didn’t help. And the condition would rapidly mutate into the even more nightmarish Kodaline virus. Yet, through swift and prudent action, the rest of the world largely succeeded in keeping the outbreak at bay.

This was, in other words, the perfect moment for a sci-fi caper in which a train serves as a metaphor for societal divisions. The haves sitting pretty up front, the have-nots grumbling in the back. And Evans as the disrupting force trying to make it all screech to a standstill.

But that was seven years ago, in the Before Times. Snowpiercer the series, by contrast, chugs into our lives at a fraught moment for dystopias. Westworld season three came and went without anyone noticing. Mostly because we had a once-in-a-century pandemic as distraction.

Charlie Brooker, for his part, has declared he’s done with Black Mirror for the time being. Anyone who suffered through Black Mirror season five might say the show was already done with him. But no matter. The point is that even the guy who has made a career out of dystopias is taking a breather.

Why are they all on a train anyway? Snowpiercer’s big idea is that the climate crisis has finally reached breaking point, Earth plunged into a destructive winter. Those sneaky one-percenters realise the only way to keep ahead of the ravaging weather systems sweeping the planet is by hopping on a 1,000-carriage train and setting off to perpetually circumnavigate the globe.

Much like commuters dashing for the 11.15pm Newbridge service as it’s about to ease out of Heuston, they run screaming for the Snowpiercer and hop aboard the ‘tail’

It’s the perfect plan. Or at least it would be were it not for the pesky unwashed masses who insist on hitching a ride to salvation. Much like commuters dashing for the 11.15pm Newbridge service as it’s about to ease out of Heuston, they run screaming for the Snowpiercer and hop aboard the “tail” – and are therefore referred to as “tailies”.

They are forced to live in cramped darkness, knowing nothing but fear and claustrophobia. Irish public-transport users will thus have little difficulty empathising – though at least the poor souls on Snowpiercer aren’t at risk of being sliced in half by cyclists with cameras on their helmets when crossing at a green light.

Snowpiercer has a few things in its favour. Firstly it stars Jennifer Connelly, playing a sort of evil Tannoy announcer. I kept expecting her to say “Margadh na Feirme” in her most chilling voice. Presumably this was deemed too unnerving for Netflix subscribers.

Also, there’s a wonderfully baroque murder mystery that centres around the ritualistic killing and disembowelling of passengers. As scientists have confirmed, television is always improved by a murder mystery involving ritualised disembowelling. Of course, it’s also improved by putting Marty Morrissey in a shed – so here’s hoping for some of that later in Snowpiercer.

Yet, for all the positives, Snowpiercer ultimately feels like just one more dollop of speculative miserablism. From A Clockwork Orange to The Hunger Games via Blade Runner, V for Vendetta, Never Let Me Go and more, cinema and TV have been imagining our worst future for going on half a century. So even without the once-in-a-generation buzzkiller that is coronavirus, Snowpiercer is terribly late to the game.

This, alas, is what science fiction on the screen has become. A competition to depict ever more devious ways in which it all goes wrong for mankind. There will be floods, there will be zombies and, yes, there will be viruses. And now there will be infernal train journeys without even the promise of a sweaty Irish Rail muffin for consolation.

The problem with dystopias, sadly, is that, though they speak to the future, they don’t necessarily have much to say about how we live today. And, of course, the best science fiction, whether on screen or the page, was never really about the future. It was about the here and now.

Star Trek famously confronted American attitudes towards race by giving us a Starship Enterprise crewed by a multiracial cast. And it took on taboos by having Uhura and Kirk lock lips in 1968 – the first interracial kiss on US television.

On the screen our dystopias are largely one-note, and it’s a note that has been played to death. Snowpiercer is, in that context, a textbook disappointment

More recently, Ronald D Moore’s reboot of Battlestar Galactica interrogated the United States’ “hyperpuissance”. When in season three the alien Cylons enslave humanity and force us all into labour camps, the “good guys” strike back with suicide bombings. This was when the American “mission” to Iraq was going south at light speed.

Battlestar Galactica was that rare series that pushed back against the jingoism of 24 and shows like it. Instead it argued that the war on terror, just like all the other wars, was not a story of black and white.

Dystopian fiction doesn’t always make space for such subtleties. There are, of course, exceptions. NK Jemisin’s Broken Earth novels, for instance, are some of the best books recently written about the climate crisis and where it is taking us. (To be incredibly simplistic, imagine The Handmaid’s Tale meets Mad Max.)

But on the screen our dystopias are largely one-note, and it’s a note that has been played to death. Snowpiercer is, in that context, a textbook disappointment. It’s wonderful to look at; the performances are first-rate. But in terms of what it has to say about life as lived today, it’s on the slow road to nowhere.

Hoyasaxon, a modern-day Decameron: an experiment in narrative healing
9