The naked truth about dance

In Greek mythology, the gods were depicted nude to show their higher status, but these days little inflames indignation like the sight of the naked human body. For some artists, and dancers in particular, it’s an essential, everyday part of their work 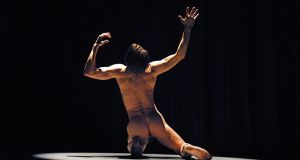 Theatre audiences are only ever warned about strobe lighting and nudity. One causes epileptic fits, but what’s so dangerous about the other? Quite a lot, it seems. Nothing inflames prudish indignation like the sight of the naked human body. And that’s not all, according to dance duo Fitzgerald and Stapleton, who perform naked.

“It’s exhausting and it’s a constant battle. And to top it off we get negative comments from people who think we’re doing it to attract this kind of attention.”

So why bother? For Fearghus Ó Conchúir, performing without clothes isn’t a conscious choice, but dictated by the work. He refers to art historian Kenneth Clark’s distinction between naked and nude: being naked is merely to be deprived of clothes, but being nude is something that is staged and suggests a balanced, prosperous and confident body. Ó Conchúir doesn’t set out to display a nude body, rather the body becomes naked because of the aesthetic choices he makes in the rehearsal studio.

“I think that nakedness emerges in some of my work because I’m not afraid of it,” he says. “If it seems necessary or useful in the pursuit of a choreographic idea then I’ll follow it. For example, in one section of Cure , where the intimate relationship between a piece of fabric and my skin is important, it made sense to me to take away all the other barriers, like clothes, between me and that fabric. The result is nakedness, but it’s not the aim.”

Nevertheless, artistic choices around nudity come under particular scrutiny, as Ó Conchúir found when filming Mo Mhórchoir Féin for the RTÉ Dance on the Box series. Because it was filmed in a church, it was suggested that his near-nakedness might be replaced with some costume, even a flesh-coloured body suit.

“Those options made no sense to me, since the vulnerability of the naked body was important to the impact of the work, as was its implied sexuality,” he says.

“More importantly, the near-naked body of the male dancer in the church has a central and overwhelmingly authoritative precedent in the space already: the figure on the cross. So in that case, the unclothed body was a necessity. It wouldn’t make sense otherwise.”

He won the argument and performed unclothed.

Ó Conchúir’s Cure , part of this year’s Dublin Dance Festival, comes with the almost mandatory “contains nudity” warning, as does Egg Charade , choreographed and performed by Aoife McAtamney and Nina Vallon. Their nudity was also not preconceived, but came about during the creative process because they wanted to present a body that was free of the social branding that comes with clothes.


Automatic association
A nude – or naked – body can signify many things along a spectrum from extreme vulnerability to ultimate power. It can represent an unsocialised primal being, but in Greek mythology the gods were depicted nude to show their higher status. These days, present a naked body on stage, particularly a female naked body, and there is one automatic association: sex. “Nudity does not have to be linked to sex or pleasure and I have the right not to be sexual even if I am nude,” says McAtamney.

It’s a sentiment shared by Fitzgerald and Stapleton. “Our nakedness is a protest against the pornographised, photoshopped, dissected, airbrushed, sexually objectified, passive images of women which we’re constantly being fed,” says Fitzgerald.

As dancers, their artistic expression happens through the body so they can articulate their ideas about the body by performing naked. “We’re not hiding our physique, altering how we look with clothing or editing our movement choices in case we upset anyone.”

“Society is so engrossed in this sexualised culture that many people can’t see beyond the pornographic,” says Áine Stapleton. “But this is exactly why I continue. It is important to me as a woman, a dancer, a friend and an aunt living in a society that preys on women’s self-esteem to the point where serious body dissatisfaction is created, that I have my art form as a means to challenge these opinions.”


Cure is on Wednesday and Thursday and Egg Charade is on May 21st and 22nd, at Project Arts Centre, as part of Dublin Dance Festival. dublindancefestival.ie. The Work The Work by Fitzgerald and Stapleton is at Druid Lane Theatre, Galway on Saturday ; Anseo, Dublin, from May 24th to 25th; and Ballina Arts Centre on June 7th. fitzgeraldandstapleton.com