The Europeans, no 16: Gioachino Rossini 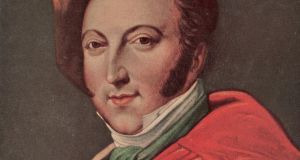 Gioachino Rossini was born in Pesaro, a pleasant, small town on Italy’s Adriatic coast, in 1792. His father was a horn player and his mother a singer, and he was inducted into the family band, aged six, to play the triangle, a not hugely complex instrument but one which requires a sure sense of timing, an essential musical skill he learned early and retained.

Rossini’s childhood was disrupted when his father, Giuseppe, was imprisoned for republicanism in 1799. His mother brought him from Pesaro to Bologna, where he sang in a church choir and received some musical education, learning to play cello and horn. At 12, he began to compose.

At the Bologna music conservatory he exhibited such an enthusiasm for the music of Haydn and Mozart that his fellow pupils nicknamed him il Tedeschino (the little German). This early musical exposure no doubt contributed to his excellence in orchestral composition, most evident in his sparkling operatic overtures.

His first opera, the one-act La cambiale di matrimonio, was produced in Venice in 1810, when he was 18. By his early 20s, he was famous throughout Italy, though not without his detractors. The opening night of his most famous opera, The Barber of Seville (1816), based on a play by Beaumarchais, was sabotaged by the jeering of a large claque of supporters of rival Giovanni Paisiello, who had reworked the same story 30 years earlier.

Subsequent performances, however, established Rossini’s Barbiere as the outstanding operatic work of its time. Years later, its composer met and was congratulated by Beethoven, who told him the work would be remembered as long as Italian opera was remembered. He also advised him to stick to the comic mode (opera buffa) as “any other style would do violence to your nature”.

In 1822 Rossini married the Spanish singer and composer Isabella Colbran. Throughout the 1820s he often worked abroad, in Vienna, London and Paris, commanding huge sums. Heedless of Beethoven’s advice, he wrote the serious opera Guillaume Tell, today best known for its overture, whose rousing finale became familiar as the music for the radio and TV series The Lone Ranger .

Colbran and Rossini separated in 1837 and the composer began a liaison with the French artists’ model Olympe Pélissier, who already cooked for him and helped manage his financial affairs. In 1845 Colbran died, and Rossini married Pélissier in the following year.

Italian opera after Rossini continued to grow in popularity, with the great Giuseppe Verdi, and then, in the 20th century, Mascagni, Leoncavallo and Puccini. The latter developed a style which became known as verismo (realism), but which some might see as closer to melodrama.

At any rate, it facilitated the production – now perhaps seen as encapsulating the essence of opera’s appeal – of hugely dramatic arias and the tradition of the diva “giving it all that”.

William Tell was to be Rossini’s last opera. He left composing behind, more or less, in 1829, although he was to live almost another 40 years, and devoted much of his retirement to another pursuit that in Italy is almost as respected as music – the art of cooking.

The most famous dish named after him, tournedos Rossini – a steak on a crouton topped with foie gras and truffles and served in a Madeira sauce – seems singularly inappropriate to the supreme lightness of the music he bequeathed us.