Standing with Homer in the trenches of the Western Front

Opinion: We are in an immensely rich period of creative re-workings of the Iliad 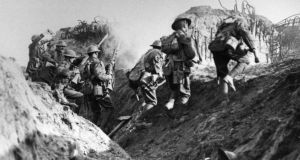 ‘Stand in the trench, Achilles/ Flame-capped and shout for me’. Above, British soldiers in the trenches during the first World War. Photograph: Original Publication: From ‘Official Series The Great War’/Hulton Archive/Getty Images 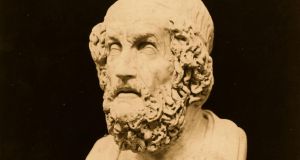 ‘American classicist Caroline Alexander in her recent book, The War That Killed Achilles, highlights the ways in which the Homer’s Iliad emphasises the pain and destructiveness of war.’ Photograph: Hulton Archive/Getty Images

Amid the remembrance of the first World War, a poignant detail emerges. Many soldiers went to the Western Front carrying a copy of Homer’s Iliad. One soldier, Patrick Shaw-Stewart, inscribed a poem of his own on the flyleaf, in which he entreats the warrior Achilles to stand with him in battle, as a protector. “Stand in the trench, Achilles/ Flame-capped and shout for me,” it concludes. He fought in Gallipoli and died in France in 1917.*

Stand in The Trench, Achilles is the title of a recent book that traces classical references in the poetry of the war, not only by the celebrated war poets, but by men of all backgrounds, who were steeped in knowledge of Greek and Latin authors. Through close readings, the scholar Elizabeth Vandiver shows the extent to which Homeric ideas and images sustained the soldiers. Or more precisely, Homeric ideals.

Idealism endures, but it also mutates. The English writer and historian Adam Nicholson has Homer written on his heart. His new book, The Mighty Dead: Why Homer Matters, is a form of pilgrimage, “a passionate pursuit” of the origins of the poems: both a journey undertaken by him around the eastern Mediterranean and beyond, and a vivid history of their interpretation. Reading it, there is a sense of entering into a dialogue with all the commentators and translators of the epics who have gone before, and that those layers of interpretation have become almost as important as the Homeric texts themselves.

We are in an immensely rich period of creative re-workings of the Iliad, from this year’s version for the stage by poet Simon Armitage, The Last Days of Troy, to Christopher Logue’s poem sequence, War Music, and Alice Oswald’s Memorial, with what she calls her “reckless dismissal of seven-eighths of the poem,” omitting Achilles and Agamemnon entirely. Madeline Miller’s best-selling novel The Song of Achilles invented a youthful back-story for Achilles’s beloved companion Patroclus, and cast the two men, unambiguously, as lovers.

Oswald and Miller join other women writers such as Margaret Atwood (The Penelopiad) and Christa Wolf (Cassandra) tilting the perspective on the Homeric texts, extracting the voices of minor characters, or presenting the narrative through the lens of the female characters.

The effect of these imaginative shifts is to create a Homeric world that is more palatable to our contemporary tastes. So, if reading the original Iliad makes us uncomfortable, there are multiple alternative versions, as well as new critical takes on the age-old question: does the Iliad glorify war?

American classicist Caroline Alexander in her recent book, The War That Killed Achilles, highlights the ways in which the Iliad emphasises the pain and destructiveness of war, pointing out that both the Greeks (Achaeans, as they are known in the poem) and the besieged Trojans long for the war to end and to return to their families.

But in her reading of the Iliad as an anti-war poem, she may be in danger of downplaying its ambivalence about war, its references to the joy of battle, as well as its horror. Hand-to-hand combat between warriors are described in zestful detail, and when Achilles goes on a killing spree after the death of Patroclus, his brutality is impossible to deny.

Alexander views past tendencies to interpret the Iliad as a martial epic celebrating war as “one of the great ironies of literature”. It has certainly been criticised as such, most harshly perhaps by the French philosopher Simone Weil, who in a stark essay on the Iliad, written on the eve of war in 1939, explored its emphasis on force and the will to violence, and the reduction of the warriors in the poem to “things”.

Her view does not take into account the profound sympathy evoked in the climactic meeting between Achilles and the Trojan king, Priam – the father of Hector, whom Achilles has killed – in which their separate griefs become one lament.

This is where the Iliad’s magnificence lies, and its sense of tragedy. Where, after unimaginable numbers of deaths, compassion and understanding prevail, and both men are briefly united in an acknowledgment of suffering as an unavoidable aspect of being alive.

For Adam Nicholson, Homer is not glamorising war, nor is he providing lessons or answers of any kind. What he thinks is essential in the poems is “the ability to regard all aspects of life with clarity, equanimity and sympathy, with a loving heart and unclouded eye”. He concedes that his version of Homer is a very 21st-century one: “Homer with no trust in the metaphysical; a multiculturalist, able to empathise with both gang and city . . .” And his description of Homer as a liberal and feminist may be an anachronistic stretch too far. Or just wishful thinking.

If Nicholson seems to be finding in the poems that which he is seeking, generations of readers have surely done the same.

New versions, interpretations and arguments will continue for as long as these texts exist, contained in whatever new digital forms emerge – or even in the same printed codex that soldiers read in the trenches.

Helen Meany is a journalist, critic and arts consultant