Forget ‘Serial’: these live radio plays will have you shivering in your seat 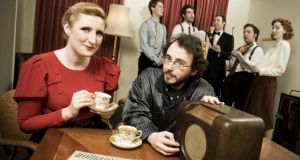 Wireless Mystery players: Aislinn Clarke, Reggie Chamberlain-King with the rest of the cast

Going to see a play and then spending most of the evening with your eyes shut sounds absurd. But relying solely on what your ears are telling you is the best way to experience the weird, whimsical and other-worldly charm of the Wireless Mystery Theatre.

Based in Belfast but regularly popping up in unexpected venues – including golf clubs, bars, bookshops, a former asylum and a rain-saturated field in Co Monaghan – the Wireless Mystery players are an audio theatre company. Specialising in live staged radio plays, their aim is to transport audiences back to the golden age of radio – from the 1920s to the 1950s, before television took over – when the whole family gathered around the wireless to listen to stories of mystery, romance, horror and suspense.

Each old play is faithfully re-created, just as the broadcast would have originally been performed: the actors work from scripts, leaning in to the microphone to deliver their lines, and there’s live music, sound effects and authentic commercials from the period. Wireless Mystery is a defiantly lo-fi company; particularly when it comes to sound effects, the usual rule is that nothing can be used that wouldn’t have been available to the first producers of the play. So that’s out with digital wizardry and in with car horns, electric mixers and rattling typewriter keys.

Orson Welles’s 1938 version of The 39 Steps was its first production, in 2010, and since then it hasn’t stopped, performing stories by Charles Dickens, Edgar Allen Poe, HP Lovecraft and many others, some of which have been broadcast internationally. They even unearthed and exhumed an obscure play called The Ghost Hunters, originally broadcast on CBS in 1948, which was Harold Ramis’s inspiration for the hit 1984 film Ghostbusters.

Nostalgia, and perhaps a longing for the certainties of the past, are a big part of the attraction, but Aislinn Clarke, artistic director and founder of the Wireless Mystery Theatre, believes its success is down to something more fundamental. “Good storytelling: no one ever grows out of that, do they? We don’t do things half-heartedly; a lot of craft goes into every production. But you can actually cut out a lot – the ear is easily tricked, and the brain fills in the gaps.”

The magic of melons

Reggie Chamberlain-King, the company’s creative director and Clarke’s partner, shows me a small door, about a metre high, mounted on a metal frame, that has seen a lot of use: for creaking, slamming and the ominous sound of a key slowly turning in a lock.

Melons, it turns out, are a very handy fruit. They can be punched, in a fight scene, or stabbed, if you want to sound like you’re killing someone rather squelchily. Coconut shells, for horses’ hooves, are a classic. And for this year’s seasonal performance, Over By Christmas: In the Trenches December 1914, the company is using plungers and bowls of porridge to evoke the sound of soldiers slogging through deep mud.

While coconut shells and the like have a certain rustic appeal, Wireless Mystery Theatre has started taking its adventures in sound in new, more ambitious directions. In collaboration with the sound artist Gus Leudar it staged a live, site-specific event, Dickens in the Dark, in the semi-derelict swimming baths on Templemore Avenue in east Belfast. Originally provided for grimy shipyard workers, the individual bath cubicles – each with its own tub, stool and mirror – remain intact. Hidden speakers meant that members of the audience, shivering in the dank darkness of these little rooms, suddenly had the impression of somebody getting into the bath beside them.

Leudar was also involved in the company production of Brief Encounter, performed at the Grand Opera House in Belfast. “We introduced 3D sound into a regular theatre space, which, as far as we are aware, has never been done before,” says Chamberlain-King. Leudar pitches sound within a room – for example, creating the impression that a barking dog is standing at your feet . For Brief Encounter he created the auditory illusion of a moving steam train.

“There are several ways of doing this. Some are really clever and don’t really work, and some are really simple and work really well,” says Leudar. “So after testing the complicated way, I tried the simple way: record a steam train with eight microphones around and on the track. Then, when you come to playback, place the speakers in exactly the same place as the mics were, and it re-creates the 3D sound field. The great thing is that because we had speakers below the seats, the seats actually vibrated when the steam hologram passed through the audience.”

Living together means that Clarke and Chamberlain-King spend a lot of time talking about new ideas. “Yes, one of us will wake up and say, ‘I had a brilliant dream – how can we do it?’,” says Chamberlain-King.

The home they share was formerly occupied by the poet John Hewitt, and Clarke says previous residents have reported seeing his ghost, pipe in hand, coming in through the back garden. Although a sceptic, she has been surprised by a few odd auditory happenings. “The first was after a recording session. We would always have everything turned off when recording: phones, radios, computers and so on. We were packing up in the living room when we heard a crackly and distant sound, like an old or very distant broadcast, of a man’s voice singing Working Man by The Chieftains. Our first thought was not, Oh, that’s a ghost. Our first thought was that we had left something on, but we checked everything, and nothing was on or even plugged in.”

Chamberlain-King says there’s a paradox at the centre of Wireless Mystery performances. “On the one hand we’re not trying to create a scene in front of the audience,” he says. “So that requires a hypersuspension of disbelief on their part. But, at the same time, the audience doesn’t have to suspend their disbelief at all, because they’ve got the actors and singers standing there right in front of them.”

There’s a certain comic curiosity in watching the performers juggle lines, songs and sound effects, but the real magic happens when you shut your eyes. It’s only then that the rustling of sweet papers becomes the crackle of a briskly blazing fire. Without visual distraction, your imagination floats free, and the story expands and unfolds in the mind. Just as it would have done in the minds of listeners as they huddled expectantly around the wireless set. wmtontheair.com

Gus Leudar is a sound artist who specialises in 3D sonic illusions and site-specific work. “They are basically works of art that use sound rather than sight, and I usually do them alone. Wireless Mystery Theatre are definitely an exception,” Leudar says.

“I normally like to do installations in weird places and transport the audience to a different world with sound. I particularly like doing stuff at night.

“Sound art is not much heard of, but basically a painter has his paints and a canvas, while I have my sounds – paints – and the place where I do it – canvas – which could be a railway station, a forest or an abandoned building.

“I love three-dimensional sound – audio holograms, I call them – to immerse the listeners, so I have sounds flying all over the place, and the speakers are always hidden to make it more realistic.”

In 2010 Leudar created the world’s largest walk-through multichannel sound installation, at the Eden Project, in Cornwall, and in 2013 he created a “dreamlike sound environment” covering several acres at the Glastonbury festival.

He is also pursuing a PhD at the Sonic Arts Research Centre at Queen’s University Belfast, exploring plant electrophysiology.

“Basically, I am making audible hidden processes in the forest and plants – the electrical communication in the roots of trees.”

He is currently at work on a series of sound installations in the Amazon rainforest. augustineleudar.com

Gillette ad: Why it's good for men and women that we're having this conversation
5

Poem of the week: Aubade, by Amanda Bell
7