This Lime Tree Bower review: an engaging exercise in amorality 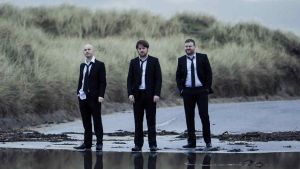 Late in Conor McPherson’s monologue 1995 play, something quite surprising happens: two people talk to each other. “I never heard that,” one commends the other. “I’d been saving it,” comes the reply.

Because the characters otherwise speak in such isolated turns, this moment usually comes with a jolt; as though their stories, fresh to the audience, were repeated eternally and unwaveringly among themselves, like figures in purgatory – or maybe just a theatre.

In this modest new staging, fleetly directed by Eoghan Carrick, the characters have been given a more specific context. In funereal dress, while the night sky turns to dawn (in a video design by Neil O’Driscoll), they nurse beers and whiskey around a table, and engage each other throughout.

Twenty years on, as a new generation approaches McPherson’s story, it counts as a subtle embellishment, here suggesting a shared reminiscence on a sad occasion, told long after the fact. They’d been saving it.

That distance is hard to measure. Joe, who speaks from the viewpoint of a naive school student, is played by David Fennelly, artless but still adult, vividly describing how he fell in with a bad influence and the loss of childhood innocence. His older brother Frank (a jovial Stephen Jones) relates his vendetta against the man who swindled their father. Their sister’s boyfriend, Ray, a jaded and alcoholic academic, proves himself the most cynical misanthropist to ever contribute to a journal on ethics.

Ray, whom actor Peter Daly makes fascinatingly ambivalent, initially seems like the odd man out. But his is the stance of McPherson’s play, an engaging amorality tale. “Principles will only f*** you up, because no one else is ever moral,” decides Frank, whose attempt to balance the scales involves armed robbery and humiliation.

The play’s perspective is similarly and unapologetically male, fuelled by pride, aggression and blokey sentimentality (even a rape victim is confined largely to its peripheral vision).

The enduring strength of McPherson’s writing, which this performance fluidly honours, is to sweep you up within its narrative flow. Remarkably unshowy, The Lime Tree Bower’s vivid images and brisk rhythm generate both an electric charge and a sense of complicity: like Ray, you feel like an accidental accomplice, rushed along for the ride.

One sly philosophical joke about a visiting philosopher involves the theory that language itself is dying, having become debased and insincere. It would be nice to hear new voices given more opportunity to meet that challenge. But this zippy and evocative play still provides a pretty solid rebuttal.