The Field review: John B Keane’s subversive streak made safe 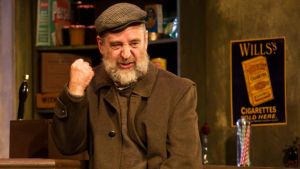 Fifty years later, we’re still digging. The question is: should we hope to discover something new beneath the well-tilled surface of John B Keane’s 1965 drama The Field? This proud anniversary production of a play last staged (by the same producers) just four years ago dutifully ploughs the furrows of land hunger and hypocrisy, social claustrophobia and the threat of looming change. But Keane’s subversive idea to take the real story of a grubby deed and give it the dimensions of a folk tale here feels more familiar than heritage drama; more rote than the Mass.

That will be disappointing to anyone who has watched recent Keane revivals strip the plays back to reveal something both real and outlandish, seeming wholly new. The most surprising part of director Padraic McIntyre’s production, played mainly against Liam Doona’s naturalistic pub setting, is to fill the ferocious role of The Bull McCabe with the long, lean and sensitive Michael Harding, who would seem more at home in a china shop. Harding makes his Bull speak in thick and indistinct tones, like someone who has recently burned his tongue, but there’s barely a shiver of menace about him. McIntyre compensates with various thumps – the crack of a stick, the beat of a bodhrán, the clang of a church bell – but otherwise the production doesn’t deal in shocks. If anything, it is here to reassure. Even the placing of a table, downstage centre, seems designed to summon nostalgia for more naive amateur dramas, to make it approachable.

That softening effect makes the play seem more distant: a blurry image from a lawless rural past of casual misogyny and face-front performance. Fiona Bell’s Maimie, a prisoner of village scrutiny and serial pregnancy, pierces through with contemporary clarity, while Mark O’Regan similarly makes his Bird O’Donnell much more tragically inebriated than comic. Rather than seek out fresh resonances, though, the keenest note here is religious. “God will help you get a good price,” Arthur Riordan’s publican/auctioneer assures the selling widow, like a trader in the temple.

Keane’s brave move was to make anything spiritual seem contaminated: a violent oath to the Holy Spirit; a conflicted mother telling her child to keep schtum on the steps of the church. This production, at its most daring moment, may turn the bishop’s haranguing sermon for witnesses into a sincere and direct address to the audience, but without making us feel implicated, it feels odd. Much better are Conor Delaney’s comically straight-laced sergeant and Geoff Minogue’s smooth local priest, who conduct their own investigation in a good cop/God cop routine. Sadly, they turn up no new evidence. Such are the pitfalls of commemorative productions, too, going briskly through the motions, leaving deeper secrets unexcavated. Until May 30th