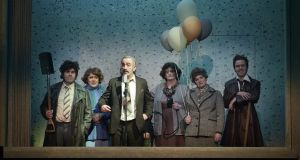 THE FALL OF THE SECOND REPUBLIC

Abbey Theatre
★★★☆☆
Michael West’s new play for Corn Exchange and the Abbey Theatre is set in an Ireland paralysed by political disarray. By sheer coincidence, or awesome feat of artistic prescience, it is also staged in one. “A coalition with the wankers?” complains one member of the ruling party that has just lost its majority to a scandal. “It would be like marrying your cousins.”

Given how nepotistic politics are in this counterfactual vision of Ireland in 1973, where Taoiseach Manny Spillane can find cabinet positions for both a sibling and a son-in-law, an arrangement between cousins sounds almost healthy. But to look at the assured Andrew Bennett as this leader, given Garret Fitzgerald’s silver cloud of curls with a heroic side-parting, and the growling voice of Charles Haughey, the unholy alliance already seems under way.

What has brought this government to a crisis, rather fittingly, is culture’s last stand. More specifically, it is a protected theatre they conspired to burn down, in cahoots with a crooked developer, to make way for a gleaming new International Banking Centre – snuffing out one life in the process. Wise to their schemes is Emer Hackett (Caitríona Ennis), evocatively named for a relentless young journalist, who is hampered by the editorial culture of The Freeman’s Journal, evocatively named for a bastion of male chauvinism.

Such is the terrain of a twisting paranoid conspiracy thriller played out as a screwball comedy: All the Taoiseach’s Men. If that sounds like its own unlikely coalition of genres, with no promise to form a stable partnership, so it proves to be. Corn Exchange’s previous ensemble plays, such as Dublin By Lamplight and Everyday, drew from the weightless transitions of their own brand of Commedia dell’arte; swiftly creating places while narrating character perspectives through endearing cartoon faces and nimble physicality. Here director Annie Ryan prefers a slightly heightened naturalism, anchoring them to the spot.

That spot is Katie Davenport’s cavernous, drab 1970s space, doubling as a newsroom, a barroom and the Taoiseach’s office, awash for the most part in a haze of nicotine and shafts of light. For a show so concerned with shadows and chicanery – and despite the delight of John Doran’s young bucks on the make, Declan Conlon’s sozzled Tánaiste, or Anna Healy’s gallery of exasperated assistants, nationalists and journalists – that lets the overall energy seep from a lengthy performance.

It’s hard not to imagine the wind has been taken out of the company’s sails by the unkindest funding decision, yet, for all its aggravating energy, the subject doesn’t help. In a recent interview, West and Ryan mused about depicting a culture of misogyny without making a misogynistic work. But can you portray such unswerving cultural cynicism, at such a bruising time, without also becoming sour?

Maybe that’s why jokes about politicians being chicken smugglers, alcoholics or militant nationalists land so hard, along with every absurdist power grab or any lacerating mention of the arts ministry. But the wit gets coarser, the plot more frayed and frantic, and any notes of idealism finally feel perfunctory and hollow. That corresponds with these beaten times, perhaps, then and now. Like the intrepid Emer, though, or Corn Exchange themselves for that matter, we can only hope that the good will persist.