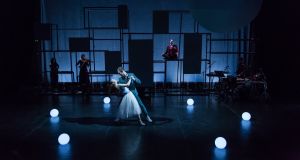 The Eurydice Project: A forceful feminist critique of power structures

The slippery ancient myth of Orpheus and Eurydice is dismantled and recreated for our times in this multilayered dance-theatre piece from the White Label collective. Observations about strong states protecting their borders, vaunting national and masculine pride and women’s violent reaction against attempts to control them make this a sharply contemporary piece.

In a number of accomplished productions over the past two years, White Label, a loose affiliation of theatre artists, has demonstrated visual and technical flair, evident again here. Director Lee Wilson’s production doesn’t attempt any classical pastiche but is austerely beautiful, with Ger Clancy’s stripped geometric stage grid dominated by light projections of the moon and night sky, by the design group Algorithm.

Making her playwriting debut, theatre producer, translator and critic Joanna Crawley joins writers such as Margaret Atwood, Christa Wolf and Jeanette Winterson, determined to rescue the women of Greek myth from passivity and victimhood. Here she gives a voice to Eurydice, portraying a clever, sensual woman, rather than the pallid maiden familiar from the canon of poetry, opera and art.

Tilting the focus away from the mellifluous-voiced Orpheus and his quest to rescue Eurydice from the Underworld, this production presents Orpheus’s kingdom of Thrace through Eurydice’s eyes, as a police state, with sinister undertones. On her marriage to him, Eurydice finds herself suffocated, and longs to escape.

Coming between the couple, even on their wedding day, is the figure of Hades. Barry McKiernan succeeds in making the God of the Underworld a mercurial, charming character rather than a cardboard symbol. As the doomed lovers, Michael-David McKernan and India Mullen fall back on irony to carry them through some explication of who they are. Accounting for his 10 years abroad, Orpheus knowingly refers to his voyage with Jason and the Argonauts as “my full epic-journey experience”, as if he’d just won a computer game. Choreography lifts their exchanges from the risk of bathos, with Monika Bieniek’s movement responding expressively to Jane Deasy’s percussive score, performed live on stage.

Beyond the marital struggles of Orpheus and Eurydice, what emerges is a forceful feminist critique of power structures. Limited and repressive ways of thinking about government, justice, communication, the environment, even religion, come under the microscope, with Eurydice re-empowered by a renewed affiliation with the female earth goddess. Picking through the shards of myth, this production has itself a shifting, appropriately fragmentary form. Alternately playful, satirical and impassioned, it reveals how the ancient myths re-incarnate themselves.