The Chastitute review: A promiscuous play that can’t settle down 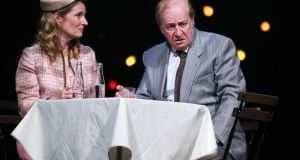 “What I am, is a disaster,” says John Bosco McLaine, by way of introduction. In Stephen Brennan’s warm performance, his shoulders swinging back and head slightly dipped, the 53-year-old bachelor farmer from Kerry is a model of innocent self-effacement. The title of John B Keane’s final play suggests something cruder, though – the opposite of a prostitute, someone almost professionally chaste. For all its broad, parochial, nudge-nudge comedy, this new production from the Gaiety – directed, designed and even composed by Michael Scott – suggests that John is something sadder still; a kind of unwilling sacrifice to conservative values.

John’s frustrated celibacy raises the concerns of his aunt (Maria McDermottroe, full of good-natured bluster), busily recruiting a housekeeper with benefits, then the oily arithmetic of a matchmaker (a skittering Brendan O’Connor, who assures him “exactly what you want, divided by what we can get”) and later the cynical instructions of John Olohan’s expertly played lothario, Sylvester, who the play unabashedly calls a “whoremaster”. Keane’s play, on the other hand, is surprisingly promiscuous. It swings from memory play to comic picaresque to rural tragedy, loving and leaving every style.

At this distance, even with the church still entangled in current affairs, it’s hard to know what to make of the play’s sexual politics, where women are forever described as “classy mares” or wanton “doxies”, or where Catherine Byrne’s widowed housekeeper, engagingly adamant in her repudiation of desire, is eventually commanded, “Come here, slut”, and obeys, like another tamed shrew.

The production suggests everyone is the product of stifling or corrupting forces. Scott prefaces the show with parishioners engaged in self-flagellating prayer, later flying in a monumental crucifix above John’s attack of scruples. Keane affords a little more latitude: the tormenting missionaries can be silenced when John chooses, and Mark O’Regan’s kindly and bluff confessor sighs “There isn’t the makings of one decent sin” in his cowed little parish.

Instead, they have been hectored into tight spaces, for which Scott’s design work rarely finds elegant correspondence. John’s life is presented to us in economical slivers – a strip of Kerry kitchen, a grimy Cork bedroom, a claustrophobic hotel room – but lighting often exposes the cavernous reaches of a bare Gaiety stage, an odd manoeuvre when John’s world is shrinking so severely. Brennan, admirably negotiating the play’s shifting perspectives, faithfully presents the story of a man who chooses obliteration through alcohol “for the want of love”. But there’s an uneasy sense that neither the play, nor the production, have given him such careful attention.