‘Riot’: Bringing the art of cabaret back to Dublin 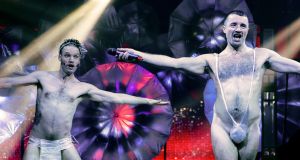 What links Tayto crisps, Panti Bliss, Roscommon GAA, Irish dancing and Jesus? The answer is Riot, the extraordinary mash-up of theatre, variety, dance, music and performance art that wowed audiences and won best production award at last year’s Dublin Fringe. Now for all those who didn’t catch it during its run at the Spiegeltent, and most likely for all those who did and are simply dying for more, the good news is that the ThisIsPopBaby production is coming back, this time to Vicar Street.

If you’re  wondering how comedic acrobatics fit in with a, quite literally, heart-breaking monologue, welcome to Riot

It’s a double cause for celebration, as ThisIsPopBaby is marking 10 years in the business of fusing club culture with theatre, and cabaret with a social conscience. With about 10,000 seats in 10 shows over two weekends, ThisIsPopBaby’s Jenny Jennings and Philly McMahon, are banking on plenty of people wanting to join in. They almost certainly will. Audiences leaving the performances at last year’s fringe were transported. Since then, some of the performers have continued their own ascent: the comedic dancers/acrobats Lords of Strut, already a fixture on the festival circuit, came to greater fame as semi-finalists on Britain’s Got Talent; while Emmet Kirwan’s short film Heartbreak, which originated from his Riot monologue about a teenage single mother, was seen online more than 900,000 times in the first two days of its launch.

If you’re now wondering how comedic acrobatics fit in with a, quite literally, heart-breaking monologue, welcome to Riot. “We started the process about four years in advance,” says McMahon, remembering how the whole thing came out of a phone call. “I was working in Australia at the time,” remembers Jennings. “And we thought: what if we made a show for the times we’re living in, but one that is distinctly Irish?”

“What would our Riverdance look like?” adds McMahon. “Like Riverdance, how would we send the message into the world that Irish people are confident, sexy and cool?” There’s a brilliant dynamic between the pair of them, as they manage the feat of both giving one another time to speak, while also finishing each other’s sentences, and it’s an exchange that characterises our conversation in Dublin’s Morrison hotel, where I’ve caught the pair taking time out from their exceptionally busy calendar. As well as putting together the staging of Riot, which includes completely reconfiguring the Vicar Street space, they’re also finalising plans to tour it internationally. Plus there’s new shows in development too.

But back to the early days of the 2010s: the marriage equality referendum hadn’t even been announced, Panti had yet to make her “Noble Call” on the stage of the Abbey (“each of those was like a Red Bull, to give us the wings to keep going,” remembers McMahon), and most people were only just starting to consider what the 2016 centenary of the Easter Rising might look like. Thinking of the centenary, the plan was to, as McMahon puts it, “make a vision for the future, a shared vision with everyone in the venue, the artists, the audience, in a way that we hope will make people – on a very basic level – go out and be nice to each other, build things together, create things together. And the idea that we can do this while a rave tune is playing is very exciting.”

The duo’s research is almost as interesting and brilliant as Riot itself. They looked at Yeats and Lady Gregory and the Irish Revival, and then came to the old Theatre Royal on Dublin’s Hawkins Street. McMahon points me towards the work of local historian Conor Doyle, and tells the story of families buying season tickets and staying all day watching variety acts because it was warmer than at home. Then there’s the tale of Judy Garland, who stayed in the bar till morning, drinking with the technical crew. She entertained Dublin’s delivery men, singing from an upstairs window. The Theatre Royal is long since gone, but it is stories like these, of passionate people, many of them outsiders, some of them considered misfits, that inspire ThisIsPopBaby in their work.

Jennings and McMahon got together when Jennings, a judge for the fringe, saw McMahon’s first play Danny and Chantelle (Still Here) in 2007. “It was a beautiful play, inspired by club culture, and for the first time I saw people going to theatre who wouldn’t usually be in the theatre. I called up Philly and said I wanted to be involved in putting it on again.”

The company name came from an old email address. “It was the kind of name that would either set us apart, or set us up for ridicule,” McMahon remembers thinking at the time. Fortunately, it was the former, and since then the company has put on work in theatres, but also in spaces as diverse as nightclubs, the Electric Picnic and the Irish Museum of Modern Art. “We’re trying to kick down the doors of the perceived elitism in the theatre,” he continues. “When we put on Alice in Funderland at the Abbey there was a 56 per cent first-time attendance rate over the six weeks.”

“That’s my favourite statistic,” chimes in Jennings. “Fifty-six per cent of the people there had never been to the theatre before.” So where does it come from? “What started out as an interest in the politics of the dance floor, went into queer politics, and on to the stories of the marginalised,” remembers Jennings. And Ireland, steadily becoming a more pluralist society, was ready to embrace them. “Now we’re really interested in the politics of fun,” she adds, her green eyes animated, smiling wide. “We became more and more interested in the stories of people who are on the edges of society,” McMahon adds. “Whoever they may be. That can be very far-reaching.” This describes the subjects of their work, but also the brilliant people that work with them, “the glorious outsiders,” as McMahon describes them. “The glorious weirdoes.”

These include, most famously, Panti. “I knew Rory [O’Neil] from the clubs,” remembers McMahon. “I didn’t know him very well. He ran the best clubs, and we were trying to get into them for free. Sometimes he’d let us and sometimes he wouldn’t. When I did my first show (and with a couple of gins on me) I went up and said would you make a show with me, and Panti said – who the f*** are you?” He’s laughing telling the story, blue eyes crinkled in amusement. “I said give me a shot – so we did.”

The pair’s first show opened in a 60-seater theatre in 2007, but by the time 2014 came along, High Heels in Low Places opened in a 1,100-seater. Now they’re also working on a world tour with Panti. I ask McMahon to cast his mind back to Panti’s “Noble Call” at the Abbey – the monologue calling for gay selfhood, pride and recognition that reverberated around the world. “We were in the taxi on our way over. Panti’s notoriously brilliant, but kind of last-minute, and I said ‘well, have you written something?’ And she said, ‘well I kind of have, but I haven’t rehearsed it . . .’ And I said, ‘well I work here sometimes, so don’t f*ck it up.’ She’ll be remembered there for a lot longer than I will!”

You can’t pick favourites in a show like Riot, though another set of memorable moments comes from former Roscommon GAA player, now aerial dancer, Ronan Brady. Picture him in his county strip, and I’ll leave the rest to your imagination. GAA players or not, “audiences recognise themselves in the show”, says McMahon. “Having fun, it’s the crazy session vibe. You only feel that energy once or twice in your career,” he says. Do you reckon? I ask him. “It’s a long life,” he agrees, a faraway look in his eyes, no doubt thinking of new adventures to come.

One of the messages of Riot is that we’re all brilliant in our own way, and all that brilliance is worth celebrating. Individually and collectively, we’re all in charge of, and responsible for what happens next. “The world has changed a lot since we put Riot on last September,” concludes Jennings. “And it’s far more potent because of it. Now we need it more than ever.”

Riot is at Vicar Street on selected dates between July 6th and 15th. Tickets from €25. thisispopbaby.com

From gunner to guerrilla – Tom Barry’s road to rebellion
9