Olwen Fouéré and the Breton connection: This time it’s personal 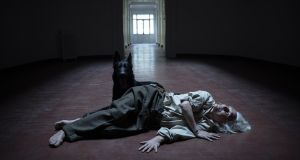 All about my father: Olwen Fouéré in Danse, Morob.

For a long time now, Olwen Fouéré has been Ireland’s leading avant -garde theatre performer. But what does that really mean?

Broadly, the avant-garde is defined by two things. One is the willingness to allow theatre to bleed beyond its usual edges, to seep in particular into the domains of visual art and music. Fouéré’s fearless collaborations with James Coleman and Roger Doyle, for example, have exemplified the idea that theatre is not fixed but must, in the age of electronic and digital media, continually seek to test and rethink what a live performance is and means.

The other, more specific to the actor, is that the avant-garde is impersonal. It generally requires the actor to have a strange, angular presence, to hold the audience at some distance. The audience is not to be invited in, to be asked for sympathy. It is to be confronted, dislocated, rendered uneasy. So the actor must compel attention without being too direct.

This, she says, is not “me”, or even a version of me stretched into another recognisable character with some of my physical and psychological characteristics. This is something else, some vivid presence that is also an absence because it withholds itself from us. It does not ask to be identified with – it asks more fundamental things about identity itself.

The fascinating thing about Fouéré’s latest creation is that it departs in significant ways from this second aspect of the avant-garde. It is not entirely impersonal.

Danse, Morob, which ran at the Project in Dublin during much of January, was written for Fouéré by French playwright and novelist Laurent Gaudé. In some respects, it is not untypical of the work she has done before. It uses an open stage with disconcerting props – in this case, black plastic bags full of old clothes and a wooden table and chairs. It shifts between very different registers: straight solo narrative, choreographed movement, dialogue, dumbshow. It also shifts from the semi-real to the purely mythic.

Fouéré’s figure (character would not be the right word) is, at one level, the daughter of a former political prisoner whose grave has turned out to be empty. But she is also led and accompanied by a mysterious and invisible pack of dogs, recalling images of the goddesses Artemis and Hecuba. Gaudé’s text is high-pitched and declamatory, much closer to a Greek tragedy than a piece of social realism.

Danse, Morob is also recognisably Fouéré’s work in the way it engages with visual art, in this case the dominant screen on which play the superb images by José Miguel Jimenez and Luca Truffarelli. These images, of prison interiors and night-time journeys, are not incidental or decorative: Fouéré moves ever more into their world, and the play culminates in a riveting passage in which she interacts with a screen version of herself.

These elements are broadly familiar from Fouéré’s work. But what’s different is that Danse, Morob, for all its use of aesthetic distance, is also deeply personal. At one level, Morob, the dead father who had been a nationalist icon, is a composite figure from the Maze – an implacable, immovable revolutionary hero. At another level, he is also Yann Fouéré, the performer’s father, an implacable Breton nationalist who died in 2011 at the age of 101.

The odd name Morob may be intended to evoke Fouéré’s Mouvement pour l’Organisation de la Bretagne (MOB). In any case, Yann Fouéré had many of the experiences of interrogation and confinement ascribed to Morob.

During the second World War, he edited a Breton newspaper that was broadly sympathetic to the Vichy regime. In 1944, after the liberation, he was interned and charged with collaboration with the Nazis. This was thrown out by the French courts when he was eventually tried in 1955.

In October 1975, together with 50 other Breton militants, Fouéré was arrested on suspicion of involvement in the underground Front de Libération de la Bretagne, which had begun a bombing campaign. He spent 105 days in La Santé prison in Paris, but was released without trial. (It is poignant, given Olwen Fouéré’s splendid history of performing Beckett, that Beckett himself, whose flat overlooked La Santé, may well have glimpsed her father as a prisoner.)

It is this history, rather than that of the H-Blocks, that seems to be the beating heart of Danse, Morob. And this matters a lot to the power of the piece. The H-Blocks have already been very heavily mythologised, and the hunger strikes in particular were a drama so powerful that any further dramatisation seems superfluous. Fouéré is not exploiting that mythology, but she is using it as a way to deal with something else: the cost of absolute commitment. What, the piece asks, is it like to exist in the shadow of a great, unbending political passion?

Morob’s grave is empty, it turns out, because he is not literally dead. His wife has had him buried because the man who went into prison has had his human life drained away from him by the struggle. Psychologically, Morob never really came out the prison, and it is his daughter’s job to release him out of a frozen mythology.

For all its avant-garde techniques and poetic ambitions, this deeply personal quest makes Danse, Morob one of the bravest things this bravest of performers has ever done.