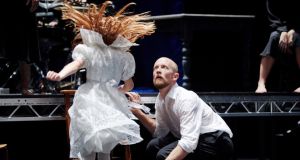 O’Reilly Theatre, Belvedere College
★★★★☆
Michael Keegan-Dolan is a master of memorable imagery. Although his currency is bodies in motion, it is the stilled image that stays in your mind after his latest show, Mám: the white-dressed girl facing a glowering ram; 12 faceless dancers lined up as if for execution; the rakish poses of an off-duty chamber orchestra waiting for their cue. These are just some of the images that Mám sears upon the stage over 90 minutes of ritualised ecstasy.

Taking its cue from the Irish language word, which evokes ideas of duty and danger, Mám is less narrative-based than Keegan-Dolan’s previous work with Teac Damsa and Fabulous Beast. The loose scenario is a recognisable one – a young innocent (Ellie Poirier-Dolan) bears silent witness to the machinations of the adult world – but the composition of the performance is impressionistic rather than story-based, as the ensemble merge, pair off and regroup, the child a centrifugal force among them.

The original music from Cormac Begley and the stargaze ensemble plays a key role in manipulating the mood, as the initial celebration turns savage, as tenderness is juxtaposed with rage, as joy trembles on the edge of violence.

The loose and sinuous style of the choreography belies an exactitude and precision, which the company exploit in the opening movement of the structured performance to embellish the lone bleat of Begley’s accordion with the musicality of their feet moving in unison across the floor, as their arms enact a variety of fluid upward gestures. The simple set design by Sabine Dargent is also deceptive, teasing the audience with a slow reveal that it would be unfair to dwell on any longer.

Alternately playful and provocative, funny and frightening, Mám is a stirring, sensuous showcase of the emotional power of the physical form.

Runs as part of the Dublin Theatre Festival until Saturday, October 5th