Limerick reinvented: City of Culture programme aims for the edge 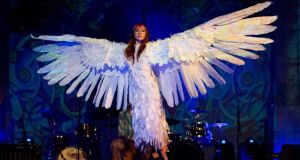 ‘Urban, edgy and contemporary” are the aims of the €6 million programme for Limerick’s reign as the first national City of Culture.

The year-long programme, which begins in January – aims to unlock Limerick’s cultural potential while creating a lasting legacy for a city hoping to create an image of itself as an events centre for Ireland.

Pat Cox, chairman of Limerick City of Culture 2014, sees it as a chance to reimagine the city. The programme features some 200 performances and exhibitions across all facets of culture and the arts.

“The edgy, urban and contemporary will blend with the traditional to reveal the rich cultural diversity and heritage of the Treaty City,” says Cox. “It is, in short, a chance to reimagine Limerick, not to turn a blind eye to the many challenges we know we have, but to bring a fresh eye to those challenges and think of a new prospect for the future.”

Riverdance comes home
The inaugural flagship event will be the six-night run in January of Riverdance at the University of Limerick Arena, which executive producer Julian Erskine says will be the “full European touring production”, with seating for 2,500 people. “We are starting our 20th anniversary tour in Limerick, bringing Riverdance home to the birthplace of its composer, Bill Whelan, ” says Erskine.

Other programme highlights include the Irish premiere of NoFit State Circus, the UK’s leading contemporary circus company, the Irish Chamber Orchestra performing in the Milk Market with Ballet Ireland, a People’s Museum running throughout the year, a Proms in the Park-style event in the summer, and a performance by flautist James Galway at University Concert Hall.

Karl Wallace, artistic director of Limerick National City of Culture, says the programme was designed to be “edgy and contemporary”.

The Irish premiere of the South American show Fuerza Bruta, scheduled for March, is geared towards a younger market, says Wallace.

“Fuerza Bruta is like a club event with a mixture of acrobatics. It’s currently selling out in New York and it sold out at all its performances at London’s Roundhouse.”

Faust, an internationally recognised piece of theatre directed by Silviu Purcarete, will also stage its Irish premiere in Limerick, and is expected to attract large audiences with its stark adult content and nudity.

“It’s a very contemporary piece of work,” says Wallace. “We wanted to make sure that we had really good-quality theatre in the programme, so we looked for an international practitioner, and Silviu is one of them.”

Special project
While the remainder of the programme is due to be announced on a rolling quarterly basis, Wallace hints that work is under way to secure one “very special project” never before seen in Limerick.

“Our intention is there will be more legacy and commissioning work coming through. Our planning cycle has been short. I think everybody has been very honest about that. There are things we are crossing the i’s and dotting the t’s on at the moment, but there is one very special project, and if we manage to do it, it would be very, very exciting for the city. If we pull it off, it has got every single art form in it,” he says.

Some 109 Limerick groups have successfully applied for funding to deliver shows and exhibitions.

The year opens with a New Year’s Eve extravaganza that will include a Procession of Light, comprising illuminated floats, carnival, drama and community performers.

Further marquee acts for large-scale outdoor performances will be announced in the coming weeks and months.