Life on the road for ballerina with a baby

As Moscow prima ballerina Valeria Kruglova arrives in Dublin to play Sleeping Beauty, she says the hardest role is being a mum on the road 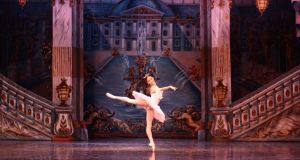 Valeria Kruglova: “Every ballet has got its own story, it’s telling its own fairytale. I really love Tchaikovsky, so I enjoy ‘Sleeping Beauty’.”

Valeria Kruglova cannot remember where she was on Christmas Day. It was one month into the Moscow City Ballet’s latest European tour, and all the prima ballerina could think about was her two-year-old son back in Russia. It is the first time she has gone on tour since he was born, and after more than six weeks apart she’s feeling the distance.

Looking at Kruglova’s tiny physique, it’s almost impossible to imagine this slight dancer gave birth to a baby only two years ago. Dressed in a green leotard, blue tracksuit bottoms and a grey hoodie casually draped over her shoulders, the Russian ballerina is relieved to take a break from the company’s rigorous daily rehearsal schedule.

“Every day is the same,” she says when asked to describe a typical day on tour with the company. “You wake up, go to breakfast, come to the theatre, do your class, do your rehearsal, do the show, get in the bus, go home, take a shower and go to bed. That’s literally all there is.

“Of course, at home I’ve got a small child. So every day there is completely different.”

The ballerina, who plays the lead female role of Aurora in the company’s production of Sleeping Beauty, has left the child in Moscow with his father. “His father works in the state theatre, so he’s based in Moscow all of the time, which is great. If he goes on tour, it’s only for two weeks.”

After more than 14 years dancing professionally, Kruglova (34) is well accustomed to living out of a suitcase. She began ballet at the age of nine after her grandfather brought her to a dance school and suggested she try it out. Kruglova’s father also encouraged her to pursue dance when he saw how much she enjoyed it.

Her mother, however, was not convinced. “The only one who was really against it was my mum because she’s an economist, and so she had greater ambitions for me.”

Nevertheless, Kruglova continued dancing in her hometown of Mirny in eastern Russia. She then moved to the Siberian city of Ulan-Ude to continue her training. In 2002 she graduated from the Buryat State Choreographic Institute and since then has performed leading roles with the St Petersburg Ballet Theatre and Moscow City Ballet in productions of Sleeping Beauty, The Nutcracker, Don Quixote, Romeo and Juliet and Cinderella.

The afternoon we meet, she is rehearsing for the evening performance of Sleeping Beauty. For the matinee, she joins the corps de ballet (main ensemble) so she can preserve her energy for her ambitious solo performance a few hours later.

While we chat in the theatre lobby, the company rehearses on stage under the watchful eye of artistic director Ludmila Nerubashenko. The former leading soloist with the company sits in the centre of the empty auditorium, shouting directions in Russian as the performers repeatedly go over their steps.

Kruglova enjoys dancing the part of Aurora but her favourite role is the lead in Romeo and Juliet. “Every ballet has got its own story, it’s telling its own fairytale. It’s difficult to explain, to be honest. I really love Tchaikovsky,so I enjoy Sleeping Beauty. But I also like Romeo and Juliet.”

For this tour, the company includes nearly 50 dancers. They have moved to the Russian capital from places as far off as Belarus, Kyrgyzstan, Kazakstan and Japan. The ballet is accompanied by a small, predominantly Hungarian orchestra. Before performing in Dublin this week, the company will have visited Bulgaria, Belgium, Poland, Lithuania, Estonia and the UK.

After more than a decade of touring around the world, Kruglova has learned that the audience responses vary from country to country. The greatest reception she ever received was in Brazil, where the crowd stamped, whistled and clapped as she took her bow.

The spectators were far more subdued in China. “When the ballet finished, they did applaud but it was very restrained, which was a strange experience. But the strangest was during the actual performance. When we do the solo bits and variations you would normally get applause, But there was none at all.

“When you give all your emotions to something and don’t get anything back, you end up feeling empty. But when you get it back you become filled with emotion yourself.”

And what about Irish audiences? Halfway between Brazil and China, she chuckles.

When performing Sleeping Beauty, Kruglova always looks forward to the third act, when she dances the pas de deux variation with the male lead. The scene takes place in the palace ballroom as the court celebrates the wedding of Sleeping Beauty to the handsome prince who awoke her from her 100-year slumber. The newlywed couple present themselves at the celebration dressed in snow-white costumes and perform a series of dances to an audience of fairytale characters, including Puss in Boots and Red Riding Hood.

“I like the pas de deux a lot because the choreography is perfect for the way I’m built, which means it’s very comfortable for me to dance it. The music is also beautiful.”

Kruglova will count every second of the next six weeks until she boards her flight to Moscow and can return home to her son. Asked whether she would like him to follow in her dancing footsteps, she firmly shakes her head and says no. Asked to elaborate, she lowers her voice and whispers, “it’s private”.

After we finish the interview, Kruglova zips up her grey hoodie and disappears through the backstage door. Moments later she is back on stage, practising her pointe and stretching her leg up high above her head. She only has a couple of hours until she must again transform into the magical princess Aurora and dance the timeless tale of a spindle, a deep sleep and a kiss.