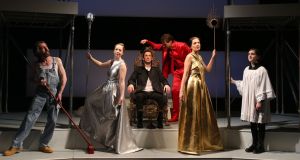 The monk and prominent intellectual Giordano Bruno (1548-1600) fell foul of the Vatican at the age of 30. His subsequent travels around the courts and universities of post-Reformation Europe attracted much controversy and hostility, but kept him beyond the grasp of the church. After the Roman Inquisition finally got hold of him in 1593, he spent the next seven years on trial for heresy and was burned at the stake in 1600. This was 33 years before Galileo was condemned to house arrest for life.

In his electronic opera, the composer Roger Doyle (born 1949) enjoys recounting a great story and exploring themes such as martyrdom, anti-intellectualism and religious oppression. These are not exactly outmoded concerns. For so dramatic a narrative, which we know will culminate in the execution of the lead character, Doyle’s recorded electronic score is surprisingly but affectingly tender and gentle. Vocal lines are often simple, often slow, as though we are all gathered for one final period of reflection before the violent end. Interludes based on a provocative farce penned by the multi-talented Bruno provide some light relief.

Like Kevin McFadden’s lighting, Bruno Schwengl’s costumes and Andrew Clancy’s sets – all superb – the music itself plays a supporting role, more so than in traditional forms of opera. But it always adroitly complements the action and voices, its commentary sometimes readily evident, sometimes more opaque, cinematic in style, or – more precisely – akin to small-screen music in the kind of programmes where the quality and value of music is recognised and sought.

As a foil, perhaps, to the relatively straightforward nature of the story and of the score and the vocal lines, director Eric Fraad adds a few additional layers and presents a huge amount for the audience to process. The result is a busy production, at its liveliest in the farce interludes and at its most dense in some of the interactions between Bruno and his two mythical representations of love, Circe and Sophia.

The small, multi-roling cast is very, very interesting. Bruno’s various nemeses are mostly sung by the amazing male soprano Robert Crowe and the role of Bruno himself – also written for a non-traditional voice part – is performed with tremendous depth and sympathy by the countertenor/tenor Morgan Crowley. Bruno as a boy is sung sweetly but with intellectual maturity by 14-year-old Aimee Banks.

Soprano Daire Halpin shows great versatility in parts ranging from the graceful Sophia, goddess of wisdom, to a cheeky courtier whom Fraad dresses in a naughty maid costume. Caitríona O’Leary displays similar range, although appearing chiefly as the sun goddess Circe, while Jack Walsh picks up all the remaining parts, from janitor to cross-dressing cardinal’s secretary.