Theatre Lovett’s sinister new version of the fairy tale leads the original very far from home. Has it also lost its trail? 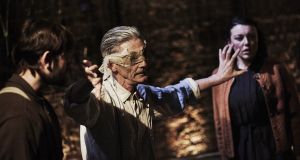 The True Story of Hansel and Gretel

They have covered some distance in their time, the two children of one of the world’s most familiar fairy tales, but in Theatre Lovett’s rambling new treatment, Hansel and Gretel seem to have strayed very far from home.

Pitched at an audience of over 12s, Louis Lovett’s play claims darker territory, offering not so much a retelling or revision of the Grimm Brothers’ version, as a sprawling trek through times of upheaval.

Set against a skeletal pantry that gradually becomes well-stocked in Zia Holly’s sly design, and guided throughout by Nico Brown and Louis Lovett’s eerie live music, this version hints at a sinister truth behind the legend, but seems entirely unsure what that might be. “We’re getting ahead of our story,” says Lovett – our writer, co-director (with Muireann Ahern), co-composer, performer and, as ever, narrator – but the story has a lot of trouble getting started. Lovett’s direct rapport with the audience, warm and spiky, is one of the company’s great hallmarks, but doubling as the father, the narrator never seems in possession of the tale.

We get a stark vignette, where a cannibalistic witch stands trial, a musical procession in which we meet the children, and even an audience with the “original” Gretel, a wheelchair-bound crone, all handsomely staged, but which feels like throat-clearing. Lovett’s play finds some intriguing traction through a combative model of parenting, where Michele Moran plays a severe Mother, preparing her children for a tough world, against an indulging, cossetting father. “Your children look down on you because you are always on your knees,” she tells him.

Wicked as that sounds, it hints at a provocative frame to reconsider the use of fairy tales that have been declawed. But Lovett won’t settle on any particular direction, so fascinated with the social history of sugar, that an older Hansa and Greta (Joseph McCarthy and Clara Harte) find themselves working as apprentices in Raymond Keane’s ominous patisserie. Keane’s blind character, a fluent cynic, delivers the polemic of the play, describing “an awful wanting world”, forever demanding “more”. That’s an odd critique within a story inspired by famine. It feels finally like a surfeit of ideas within a framework that won’t bear the weight of its moral. There, finally, it seems recognisable: a cautionary tale of being led too deep into a wilderness, without leaving a guiding trail back.