DTF review | The Game: A complex exploration of the reality of prostitution

Theatreclub’s latest show is fearless, horrific and urgent, and presents a disturbing documentary collage of life in the prostitution industry 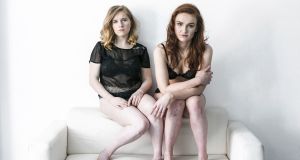 It is only an hour. We are half way through. When Theatreclub comment on the duration of their performance, it is not only to reassure us that we will emerge from our discomfort soon. It is also the mantra of a woman trying to blot out what happens to her when a man has paid for sex with her. This hour will end.

This fearless theatre company’s new production is devised from the testimony of women who are currently, or have been, prostitutes. The two actors, Gemma Collins and Lauren Larkin, repeat that “this is not happening to me, but it did happen”, emphasising that their words and the scenes they enact are not fictional, but derived from interviews with sex workers in Ireland, and from Rachel Moran’s memoir, Paid For: My Journey Through Prostitution.

Beginning with the two actors directly challenging the audience’s preconceptions and prejudices, the performance begins in earnest when five men join them on stage. These are volunteers, not actors, and will be different each night. Having agreed to a number of ground-rules, including consent and permission to leave, they are guided through the performance with care by Collins and Larkin. The men’s enactment of a series of sexual transactions is a powerful method of exploring questions of abuse, violence and responsibility, here embodied and verbalised.

From the initial abstract debate about current legislation and women as either victimised or empowered, the spotlight shifts on to men’s role and responsibility. From the destitute 14-year-old pushed into a middle-aged man’s car by her boyfriend; the woman who suffered sexual abuse as a child and repeats acts of self-degradation; the middle-class woman who chooses this as a legitimate way to earn a living: the women’s experiences are widely divergent. What emerges, cumulatively, is the danger to which they are all exposed: the threat and the reality of brutal attacks, unspeakable abuse and rape.

The many different experiences and life stories form a collage, resisting a single argument. Director Grace Dyas and her collaborators are determined to show how complex the subject is, and to ask us to think. They succeed, in a work that is brave, horrific and urgent.