Collisions of the everyday and artistic experience

You can’t legislate for an audience’s reaction, which is the fire in the belly of the Live Collision festival 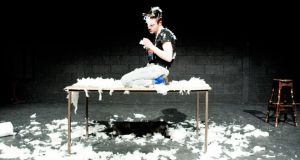 
“It is funny how sexuality dominates you for a while,” Natasha Davis exclaims at the start of Internal Terrains , her personal meditation on a life of exile: “Forty homes in less than 40 years.”

The Serbian artist is performing in Dublin as part of the Live Collision International Festival, which unfolded in intriguing sites around the inner city last weekend: on rooftops, in taxis, and, of course, in the theatre. Curated by Lynnette Moran, the festival offered a kaleidoscope of ideas and a collision of forms, matching Irish and international artists in intriguing double bills, and merging ideas of performance with everyday experience. If there was a resonating theme, however, it was sexuality, which offered a lens for many of the artists to narrate their own history and a frame for inviting the audience to consider, and perhaps reconsider, their own vision of the world.

Rosana Cade’s Walking: Holding proves a gentle, intimate initiation into the programme of events, and its various provocative explorations of sexuality. Cade invites individual participants to partake in a series of brief encounters with strangers. On paper, it offers a short walking tour of central Dublin. In reality, it is a chance to think about prejudice. Participants are asked to hold the hand of each of their guides, including Cade herself, an aggressively-dressed skinhead; Eric, a Dubliner in a tracksuit with a hood half-covering his face; Hilary, a performance artist in her 70s; and Zimbabwean Proud, a handsome young man who grew up in Dún Laoghaire.

What does it mean to hold the hand of someone of the same sex in public? Cade asks bluntly as we set off on our journey: “Do you think people think we are a couple?” Crossing Dame Street – the site of several recent high-profile assaults on same-sex couples – Cade’s point about the invisibility of same-sex couples seems especially resonant. However, issues of class, race, and age are also elicited as Cade’s local collaborators take over. Walking: Holding isn’t so much a performance as an invitation for reflection, but the isolated experience for participants is certainly enhanced by what the local guides reveal about their own experience of the event.

Natasha Davis’s Internal Terrains is also supplemented by local voices. Standing amid a tangle of wires, bare bulbs, and heavy chains, Davis shares her memories of a restless life shaped by journeys. Her exile was impelled by politics – the instability of Eastern European borders – but Internal Terrains is a psychological response, mapping her resulting restlessness through illusive images: a crow riding a remote-controlled car; a metronome inside a birdcage. At the end, eight local volunteers join Davis on stage, sharing similar stories of rootlessness, but it merely adds another layer of opacity to an already unfocused, if beautiful, work.

Internal Terrains is matched with a short 20-minute vignette by Alan Delmar under the theme We Are Only Human. Where Davis offers a philosophical approach to the theme, Delmar’s Dismantlement used humour to reflect upon male sexual identity. In summary, it involves Delmar simulating various sexual acts with a power-tool and a ream of cotton-wool, which facilitate a surprising if inevitable climax.

Outside on the streets of Dublin again, Michelle Browne’s Dublin Fare City gives audiences the chance to see the city through the eyes of local taxi-drivers. Over the course of the journey that I take, 68-year-old taxi-driver Tom shares his experiences growing up in the tenements of Mountjoy Square, where “the women were angels and the men were bad”. Tom’s history of hardship and his romantic sentimentality make for an uncomfortable juxtaposition, but he is a natural raconteur. Again, the experience reframes rather than transforms a routine experience for the audience. It reminds participants that it is the stories of our everyday lives that create the history of a place. Traditional arts practice might seek to transform these stories, but for live art, the stories themselves are enough.

Elsewhere, Live Collision probes the very idea of liveness. Bristol-based Massive Owl asks how tech nology affects our experience of the live event and our relationships. Dick Walsh and David Wall’s Discussions Without Time Limits offers a stimulating debate on important political issues by video. Without the imposition of a structured live forum, listeners have the freedom to engage on their own terms. Interestingly, this put more impetus on the speakers to hold our attention, although this is something they may not have been aware of, as the video-link format is only one-way. At the Speaker’s Corner , however, a worker’s tradition originating in Hyde Park in the 1850s and now replicated by citizen movements all over the world, the imperative is clear.

The essence and potential brilliance of liveness is its unpredictability; you cannot legislate for an audience’s reaction. The best of Live Collision embraces this, offering audiences the unexpected joy of a rooftop performance, a drag version of Lady In Red , or a chance to sit back and consider the borders between everyday life and artistic experience.