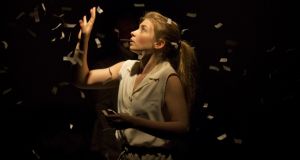 A purpose-built studio on an insalubrious street in Rialto, flanked by more than one boarded-up brick house. Smashed glass is scattered on the pavement outside. Inside: a large, well-lit space is littered with a bizarre mix of random household objects and exotic props: wooden swords, gold helmets sprung with scarlet plumes, swathes of sheet-plastic, a tiny paper boat, and several pairs of yellow rubber gloves with cryptic symbols that reveal themselves as the features of an innovative hand-puppet. A long scroll of paper, well scribbled and doodled upon, is taped to the floor like a ceremonial carpet, leading the way to an informal stage. A barefoot young man with fair hair styled in an ancient bowl-cut bounds across the studio.

‘That’s actually our script at the moment,” director Dan Colley says, as he shows me around the studio where he and his collaborators at Collapsing Horse Theatre have been working on their new show, a staging of Virgil’s epic poem The Aeneid. At one end of the room, a rough mock-up of the set frames the playing space where the actors – on this occasion John Doran, Manus Halligan, Maeve O’Mahony, Aoife Leonard and Karl Quinn – have been throwing out ideas based on Colley’s prompts. Sketches for the successful ones are what colour the paper at their feet.

This is just one of the ways that Colley has been documenting rehearsals for the past fortnight. Colley’s job for the next few days is to hone a play from this material, although it might not quite be the kind of script that you or I would recognise. “Sometimes it will just end up as bullet points,” he explains, “or notes the actors have to hit, which they will improv on the night. So, yeah, it’s a bit like that.”

There are only two more weeks of rehearsal before the show opens at Smock Alley, but Colley is unfazed by what he calls the “sense of terror and wonder” that creates the conditions for a new show to emerge. “It is just how we work,” he says. “For some people, the director is the ultimate source of all the energy in the room: their job is to start the energy and send it out. But for me it’s a case of creating an atmosphere, setting up a set of circumstances, and having the energy come back to me, even if it means when we start we don’t really know where it is going to take us.”

Collapsing Horse was established in 2012, when Colley, and friends Jack Gleeson, Aaron Heffernan and Eoin Quinn, came together to produce Monster Clock, an adventure story for young audiences about a monster horologist who is forced out of his workshop into the world for a fantastical adventure. Using puppets, music and a distinctive visual style, the production broke the boundaries of children’s theatre, touring for five months around the country, where it developed a cult following of adults as well as children.

Since then Collapsing Horse have been as prolific as a young company without regular funding can be. In 2013, they produced another children’s play, Human Child, a modern version of WB Yeats’s poem The Stolen Child, and Distance From the Event, a sci-fi Irish noir for adults. They debuted a family show about ursine cosmonauts, Bears From Space, in 2014. In 2015, they juggled all these shows in a variety of international and national iterations, while this autumn they premiere two new plays in Dublin venues while also performing Bears in Space abroad.

That is a pretty impressive output for a company relying on what they call “Franken-finance” to develop their craft. Their work in 2016, for example, is made possible by several strands of sponsorship and subsidy: an artist-in-residency bursary at Draoícht Theatre; an Arts Council bursary from the Next Generation strand; company fundraising; and a newly launched “commercial venture”: Collapsing Horse will curate next year’s Kilkenny Laughs Festival.

The intense scheduling and fingers-in-many-pies philosophy, Colley explains, complements the company’s ambition to evolve into a repertory ensemble, using the same actors to roll from one show to the next.

“The impending sense of doom is lessened when you are used to working with the same people,” Colley says. “There is a shorthand, a vibe that everybody understands. With a show like [The Aeneid] we really should have done two weeks’ development a few months ago and then come in for our four-week stint, but we didn’t have the money. But because we have all worked together before, we can sort of pick up a bit ahead of ourselves, and things have come together a lot more quickly than they would have if we were starting with a fresh group of people.”

Manus Halligan and Maeve O’Mahony have worked across various Collapsing Horse projects and are starring in The Aeneid, as well as in Conor at the End of the Universe, a play about astrophysics, which premieres in October. They both enjoy what Halligan calls “the freedom, the looseness . . . You aren’t just inhabiting a stage world, you are involved in building it. You can be imaginative as you can or want to be.

“Sometimes you are playing a human being but you could also be a ghost or involved in creating something abstract, like Aeneid’s need to leave [Carthage].”

That said, Halligan admits, “the first day of rehearsals is fairly terrifying, because you have no sense of security. You barely even have an idea of what you’ll be doing in four weeks’ time.”

O’Mahony agrees: “There are no rules, no boundaries, but it is balanced by the sense of discovery and ownership that’s there. You feel a lot more invested in it because it’s partly your story too.”

Neither Colley nor the performers at the company distinguish between the work they do for children and adults.

“Sometimes the work is specifically for young people and sometimes it is not specifically for young people. So, The Aeneid isn’t made for children– the complexity of themes would suggest it would be more appealing for an adult audience – but we wouldn’t turn a child away: there is nothing in the show that will harm them.” Conor at the End of the Universe, meanwhile, “is made with four to six-year-olds in mind, but we hope that anyone can relate to the human element of it”.

Either way, he says, Collapsing Horse’s goal is “to share a sense of child-like wonder with the audience, the same sense of wonder and discovery we get when we are making the work. There is a joke about working in the theatre: that you never get to grow up, that it’s ‘Golden Time’ all the time.”

Golden Time, performer Aoife Leonard explains, was the final hour of class at the end of the primary school week, where good work was rewarded with an hour of free play. “As we got older,” Leonard remembers, “the hour became less important to the other children, and they went off to do different things, but I would be standing there among the toys and props saying, ‘Hey! It’s Golden Time! You know it can be Golden Time for the rest of your life!’”

The Aeneid runs at Smock Alley Theatre from September 14th-24th as part of Tiger Dublin Fringe Festival. Bears in Space runs from September 6th-October 2nd at 59e59 Theater, New York. Conor at the End of the Universe premieres on October 8th at Draíocht, Blanchardstown, before touring to the Riverbank, Newbridge; Linenhall, Co Mayo; and The Ark, Dublin